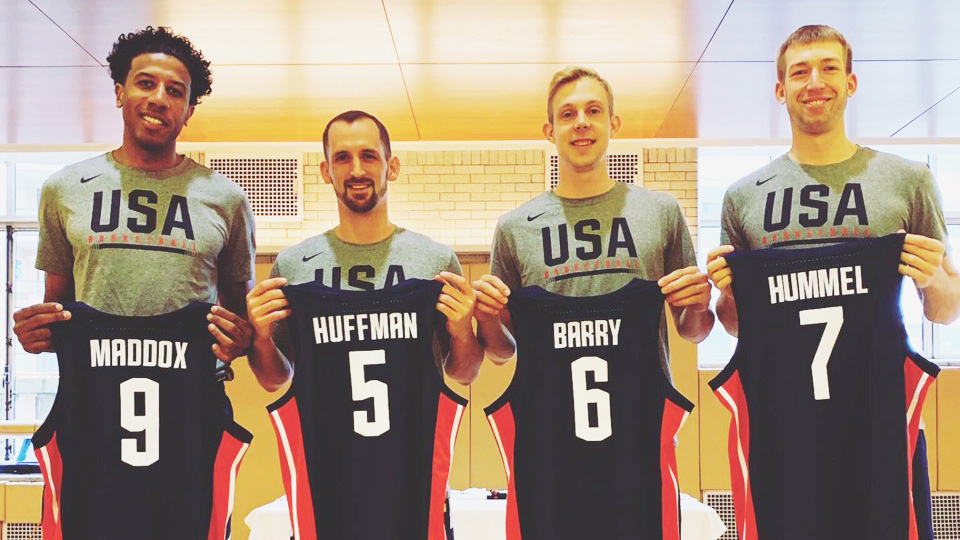 It’s always great to hear about former Eagles and ex-BBL players doing well in their careers after they’ve flown the nest and in Kareem Maddox and Damon Huffman, the Eagles have two ex-players they can feel rightly proud of.

Barry is the son of NBA Hall of Famer Rick Barry. “I’m really excited to play with Robbie, Damon and Kareem. We’re going to do our best to help the U.S. try to qualify for Tokyo in 2020.”

“It’s such an honour to put the USA jersey back on,” said Hummel. “Ten years ago, playing in the World University Games with USA Basketball was one of the best basketball experiences of my career. I’m looking forward to competing at the international level again and look forward to the challenge of bringing home a gold medal from the 3×3 World Cup.”

But it is the inclusion of Kareem and Damon that will excite Eagles fans most. Both players featured for the Eagles in the 2012/13 season after playing against them in December 2012 in a Christmas tournament hosted by the pair’s then Dutch side Landstede Zwolle.

Zwolle won that tournament with 6’ 1” point guard Damon leading his team superbly and being voted tournament MVP and 6’ 8 “power forward Kareem impressing with his athletic ability at both ends of the court.

Their performances certainly caught the eyes of Fab and Dave and when it came to recruit a side for the 2012/13 BBL season they were both approached and accepted the invitation to become Eagles. It’s fair to say without any disrespect to any other Eagles both are amongst the most intelligent players to grace the black and white.

Damon averaged 14.7 points, 4.1 rebounds, 3.7 assists and 1.9 steals per game in his year at Newcastle which was actually his last full year as a Basketball professional before the 3×3 game tempted him back to play alongside Kareem with a great deal of success.

Despite having a huge amount of international success with USA in the shortened form of the game, Damon wasn’t originally selected for this squad but when Briante Webber had to withdraw, he was the first name on the sheet to be a replacement and join up with Kareem.

Kareem averaged 14.8 points, a league leading 10.8 rebounds and 1.5 blocks per game for the Eagles and had the unusual habit of drinking a cup of coffee right before game time on the bench. Not something you see every day. Kareem also had a successful pro season in Poland in 2016/17.

Kareem, the 2011 Ivy League Defensive Player of the Year at Princeton, has the most FIBA 3×3 experience on the team with 59 games in official 3×3 competition and currently ranks No. 49 in the world rankings and seventh in the USA.

“Being on the USA 3×3 World Cup Team is a privilege and an incredible honour,” said Maddox. “I was in the stadium when Michael Johnson broke the 200-meter record at the 1996 Olympics in Atlanta. Ever since then, it’s been a dream of mine to compete in the Olympics.”

“So, taking this step and representing the USA in the 3×3 World Cup this year is a responsibility I’m taking very seriously. With the Olympics looming, representing the country well and winning in Amsterdam would be a huge step for the USA on our road to the Tokyo 2020 games.”

Olympic fans will see the launch of a new basketball discipline with the inclusion of 3×3 in 2020. The exciting and fast-paced game officially was unveiled in international competition at the 2010 Youth Olympic Games and has since become a fan favourite at FIBA 3×3 World Cup events.

Played on a half court with a 10-minute clock, and a 12-second shot clock, the first team to 21 points, or the team in the lead at the end of regulation, is the winner. The non-stop action of 3×3 will ensure it is one of the hottest tickets in Tokyo, and fans in Las Vegas will get an early taste of that excitement during the USA Basketball 3×3 Nationals.

It’s an exciting opportunity for both Damon and Kareem as they represent their country and all at Esh Group Eagles Newcastle wish them the very best for the tournament and will be following its progress with interest.