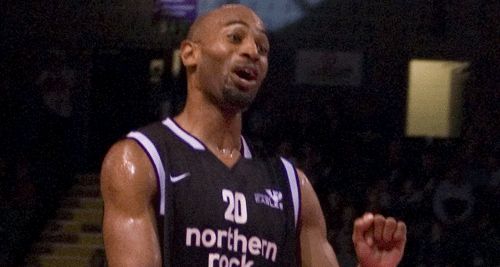 Newcastle Eagles’ coach Fabulous Flournoy is looking forward to a weekend of action which could go a long way towards deciding the destination of the BBL Championship title this season. Flournoy’s team host second-placed Kularoos Plymouth Raiders on Friday before travelling to third placed Guildford Heat two days later, and he knows the importance of the games,

‘Plymouth have silently moved up the table. There’s been a lot of talk about ourselves, Guildford and Milton Keynes, and I think that a lot of people have probably forgotten Raiders. They have consistently been up there all season, but because they didn’t do anything in the Cup or Trophy, they’ve been overlooked. They can beat anyone on their day, and Gary has done a fantastic job with them since they joined the BBL.’

The Eagles picked up their ninth straight league victory with a 97-83 success at BiG Storage Cheshire Jets on Sunday, but Flournoy expects more from his players this weekend,

‘We played well in spurts, but we’ve got this thing at the moment – and with no disrespect to Cheshire – where we’re playing to the level of the competition. With that in mind we need to be up for it this weekend, because we have two big games that could go a long way to deciding who wins the league. We’re playing against the teams second and third in the league, and then we’ve got Milton Keynes next week, so it’s a very important eight days.’

Flournoy is concerned that his side’s hectic schedule has led to some tiredness recently,

‘We’re all fit and ready, but the only problem is that the guys have only really had one day off over the last three weeks due to the schedule. We’re probably a little bit tired mentally, but we have some massive games, and if we can take care of them, we can have a bit of a break before the play-offs.’

Raiders are currently six BBL Championship points behind Eagles having played one game more, while Heat are 10 points adrift of Newcastle with one game in hand. The Guildford side have already beaten the Eagles in both the league and Trophy final this season.

Friday’s action at MetroRadio Arena tips off at 7.30pm, with Eagles visit to the Spectrum starting at 3pm.