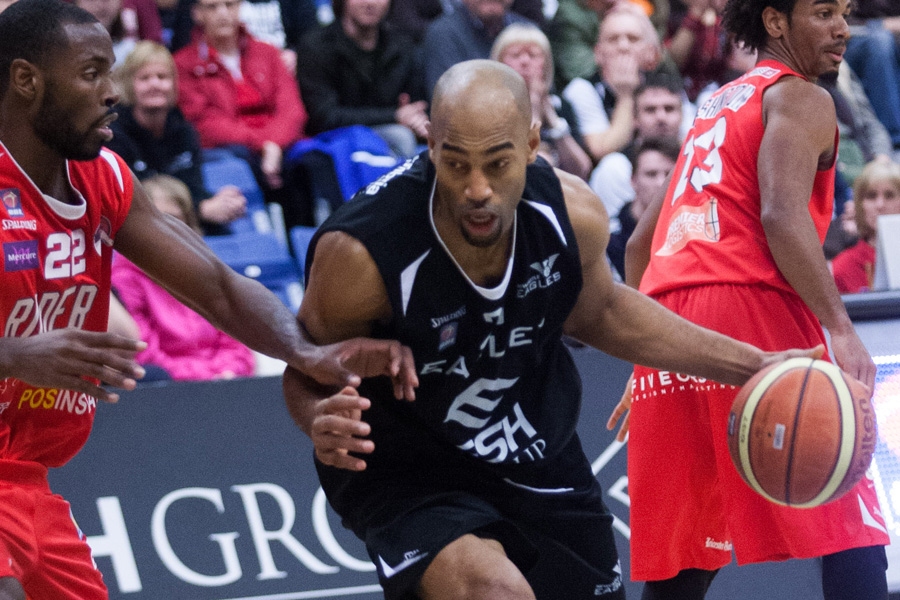 Fab Flournoy looks back on a crucial win against Sharks and forward to another vital game against Bristol tomorrow at Sport Central.

“It was a really good win for us last week especially opening up and getting our first win on our home court. It felt really good and I think everyone got off to a really good start which was important.”

“Sharks are a really good team and anyone watching the game would have thought we were going to run away with it but in the second half of the game they came storming back and it was a close game. We took the lead and they came back and then we sealed the game off down the stretch.”

“It was a hard-fought game for both teams but in the end we toughed it out and got the win we wanted.”

The win was achieved despite a week where preparation was disrupted and a little disjointed not least because of the decision to release Ricky Taylor.

“It was difficult for ourselves but equally it’s the start of the season and everyone is going through teething problems and teething issues with putting their systems in and people getting those systems. So, that disruption at this time of the year is expected to a degree.”

Now of course Eagles fans can look forward to seeing new guard Andre Jones in action this Friday after he flew in earlier this week.

“I don’t want to say Andre is a replacement player. We just had to bring another player in as we were a player down and he was available. He’s only been here two days so it’s hard to tell about him but at the same time it looks real good and he looks off to a real positive start within training.”

So, Bristol on Friday?

“They’ve come in to the league flying. I want to give them a lot of credit and respect to their organisation for putting together a competitive team that is excelling. Also in making sure they have the right foundation.”

“Bristol probably don’t get enough credit for what they’ve done especially in the EBL and how they have played over the years and they’ve just come in to The BBL carrying on that same great tradition.”

“This isn’t an easy game by any standard or by any way, shape or form. They are a tough opponent and we have to make sure that we respect that.”

Fab also paid tribute to the great support that his side have received so far in the first two home games of the season.

“Our crowd have been tremendous so far this season and I just hope that continues throughout the rest of the season because that and they are important to us and its great to know they’re there and behind us.”