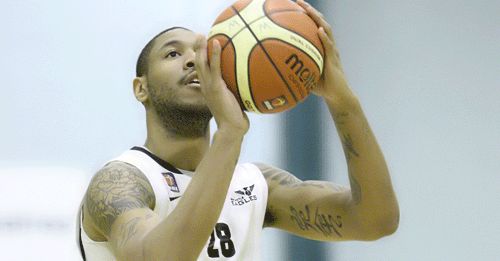 Newcastle Eagles fought off a resilient Worcester Wolves 77-82 on the road to keep within striking distance at the top of the BBL.

With Great Britain captain Andrew Sullivan back in Eagles player-coach Fab Flournoys rotation the north- east club shared around the offence with Reggie Jackson (pictured) and Lynard Stewart leading the way with 16 points.

Newcastle edged back in front with a 4-0 run to start the fourth quarter and stretched out to 65-73 with four minutes on the clock and held on to close the gap on Sheffield Sharks at the top of the table to two points.

Worcester Wolves coach Paul James said: It was a tough game for us again but a better performance than last Tuesday at Milton Keynes.

“We gave ourselves a good chance after the third quarter but at the start of the last ten minutes Newcastles offence and defence was much better than ours.

We replied with some individual plays, not team plays and when we got back to team ball we gave ourselves a chance. In the end Newcastle are a very tough team to beat.