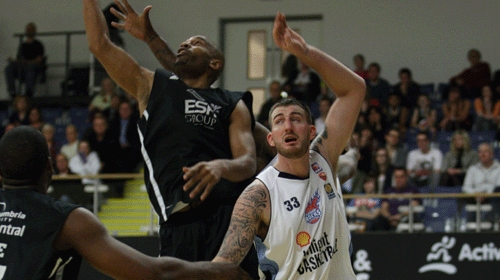 Newcastle Eagles’ player coach Fab Flournoy has been handed the accolade of Molten BBL Coach Of The Month For February after the club extended its unbeaten start to 2012.

The league leaders have enjoyed a flawless start of the new calendar year, their last defeat coming way back before Christmas and not surprisingly, Flournoy scoops the award for the second month in a row.

Just as they did during January, the Eagles won all their six games during the period including four league victories to continue their relentless surge towards the BBL title, managing to pull away from the chasing pack during recent weeks.

The player-coach led his team to crucial wins over fellow title contenders Worcester Wolves and UCP Marjon Plymouth Raiders during the month, and with these successes being achieved on the road, it adds extra sweetness to the accomplishment.

A third win away from home was attained last weekend when the Eagles powered their way past Cheshire Jets at Northgate Arena whilst a similarly impressive start helped them to rack up a comfortable home success in the north-east derby game against Durham Wildcats.

Having already safely secured the BBL Cup in January and still very much the team to catch in the BBL Championship, Flournoy now has his eyes on the BBL Trophy too.

The play-caller also guided the Eagles to convincing semi-final victories against One Health Sharks Sheffield in the BBL Trophy semi-finals during February.

Flournoy ensured his team continued playing their trademark defence during February and with both Joe Chapman and more recently Andy Thomson in sensational shooting form, the Eagles continue to be the dominant BBL club this season.

Statistically, they won their six games by a combined margin of 101 points with only two of their opponents even managing to get within single digits of the league leaders for the second month running.