Fab Gets BBL Coach Of The Year

Newcastle Eagles/News/Fab Gets BBL Coach Of The Year 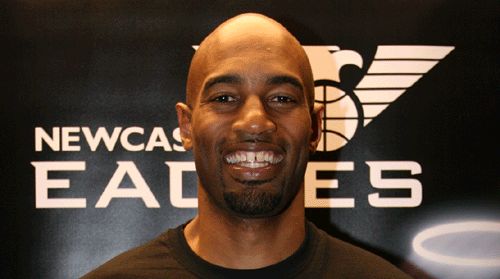 The Molten BBL Coach of the Year Award goes to Newcastle Eagles player-coach, Fabulous Flournoy, whilst the player’s equivalent is awarded to Mike Cook. Flournoy takes the award after another terrific season in charge of the North East club. This season, the Eagles edged out Sheffield Sharks in the league race, finishing top of the table with a 31-5 record, and they went into the Playoffs on an amazing 23 game winning streak, their last loss in the league being on Saturday 16th January to Worthing Thunder, whom they beat in the BBL Playoff Quarter Final.

Eagles Chief Executive, Paul Blake, hailed Flournoy as the mastermind behind another successful season: ‘This award is a great tribute to Fab and all the hard work that he puts in’ he said: ‘He can sometimes be a little bit underestimated in terms of his coaching qualities, purely because he is in the player-coach role, especially in terms of preparation and ‘x’s and o’s’. I feel that I put him in a compromising position in terms of game coaching as he has two roles, but I would be interested to see how that develops if he chooses to be a full time coach once he has retired from playing. He is an exemplary character on and off court, and richly deserves this award.’

Former NBA D-League star Cook has had an incredible season in a Sheffield Sharks jersey, as he led the BBL Cup winners to a Playoff Semi Final against Glasgow Rocks last weekend, after scoring an unbelievable 37 points in the Sharks Quarter Final win over Marshall MK Lions. The American edged out Newcastle Eagles pair Joe Chapman and Charles Smith in the vote, as he also led the league in scoring in the regular season, with an average of 26.7 points per outing, as well as keeping his team mates involved with 3.8 assists per game.

Cook was instantly a hit on these shores, and Sharks player-coach, Atiba Lyons, had nothing but praise for the 6’4’’ American: ‘He’s been very consistent for us, he’s been a good team mate to the guys and a pleasure to coach all season’ said Lyons: ‘He shoots the ball very well but also finishes inside well, does a good job of getting open off the ball, and is just a good offensive player.’ He added: ‘He’s not just a scorer but can pass the ball very well, with a lot of guys around him who can shoot the ball. He is able to find the open man with ease now that teams have started double-teaming him, and I think it is this basketball awareness at both ends of the floor that makes him an exceptional player.’

Both the Eagles and the Sharks lost out in their BBL Semi Finals, meaning that Everton Tigers, who beat the Eagles, and Glasgow Rocks, who beat the Sharks, will now advance to the BBL Playoff Final at Birmingham’s NIA. With the event also featuring the Team Colours BBL All Star Game, an exclusive performance from the FACE Team and the BBL Babes and Mascots, it makes for a great day of Basketball entertainment. There are also opportunities for younger fans to be a Player Mascot for the day, or sit on the Team Bench for the All Star Game. Click here for more information on the event, send an e-mail to [email protected], or phone 0116 268 1341 x112 now.