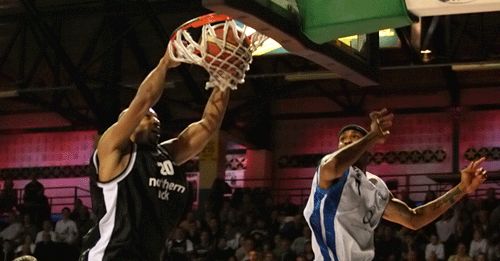 Newcastle Eagles have swooped to complete a double for March, with Fabulous Flournoy winning the Molten Coach of the Month award and Trey Moore collecting Molten Player of the Month trophy.

Flournoy led the Eagles to a perfect March with nine wins by an average of 15.1 points. The highlight of the month saw the north east side win the BBL Trophy with an 83-71 victory at Guildford Heat.

The Eagles rounded off the month with a pair of victories against their nearest challengers for the BBL Championship crown – Everton Tigers. Flournoy’s team won 90-79 at Echo Arena in Liverpool last Sunday, and recorded a near-identical 89-79 home win on Tuesday evening. The Eagles now need only two wins from their remaining five fixtures to become the first team to win back-to-back league titles since London Leopards in 1997 and 1998.

The biggest win for Flournoy’s team came in their opening game of the month when Worthing Thunder were hammered 98-64, while all nine games victories came by double-digit margins.

Moore completes a double for the north east club after winning the player of the month award. The highlight of his month would have been the Trophy final against Guildford where he collected the Most Valuable Player trophy following his 28 point performance in the title game.

The American shooting guard averaged 18.22 points per game during March, as well as dishing out 5.7 assists per game. The 33-year-old former BBL player of the year also completed a BBL record 85 successive free-throws, wrapping up a run which started in January. Moore sunk 30 of his 32 shots from the charity stripe during March before finally missing the target in last Sunday’s win at Everton.