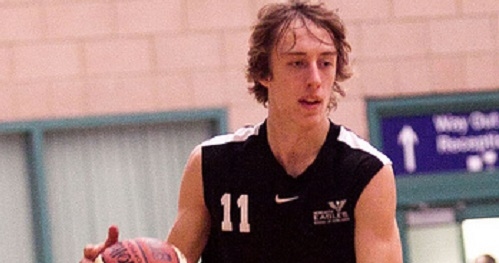 The Newcastle Eagles are delighted to announce that last season’s Eagles School of Excellence Programme MVP, 17-year old Eddie Matthew will be back in the fold this season. Whilst continuing to play in the academy programme, Matthew will be stepping up to link with the Eagles and Team Northumbria senior squads.

Matthew joined the Eagles senior roster last season as a 16-year old and also played for the Eagles Under-18’s side in the North Premier winning the team’s MVP award before scooping the overall School of Excellence award.

Last season was an amazing adventure for the local Geordie lad who not only made his bow as Eagles’ youngest ever senior player put also excelled in the England Under-17 Development programme. At Easter, playing in an International tournament in France for England he won the 3-point shooting competition, a feat he also achieved at the England National Regional Under-17’s tournament earlier in the season.

He was also part of the Eagles Under-18’s Proj3KT 3 on 3 side that won not only the National competition prior to last year’s BBL Trophy Final in Glasgow but repeated that success at the EuroLeague Fan Fest 3on3 tournament in Trafalgar Square prior to the EuroLeague Final Fours event.

Last term In the BBL on 3 occasions he netted 8 points in games including a late season effort against a fully-fit and complete Champion Leicester Riders side and he ended the season with a top scoring 19pts for England U-17’s in a 63 – 57 victory over Ireland.

Eagles managing director Paul Blake stated; ‘It’s great to be able to offer Eddie the opportunity to be able to grow in the sport. We have access to fantastic facilities courtesy of Northumbria University and playing options in BBL, EBL1, EBL 4 and the junior national leagues. Eddie is one of 6 players from our club who represented their country last season and we want to see that grow. Eddie has a great focus and attitude and we look forward to working with him again this season’.

Eagles head into the first pre-season game of the year next Monday against partner side Team Northumbria at Sport Central. The club have been working hard to recruit talent into the Northumbria programme, headed up by Marc Steutel. Steutel has had a busy summer working with the Great Britain Under 20s programme and is hoping to continue his successful journey, one which has seen him earn the England Basketball Coach Of The Year Award two seasons in a row.

A core of this talent will be working in groups with the option to play at EBL and BBL level as Steutel drives to better the 3rd place achieved by TN Men in Division One last season. Steutel said;’ I’m looking forward to another competitive year of EBL and BUCS competition. Player development is at the heart of what I want to do, so I’m looking forward to getting going with our group this year’.