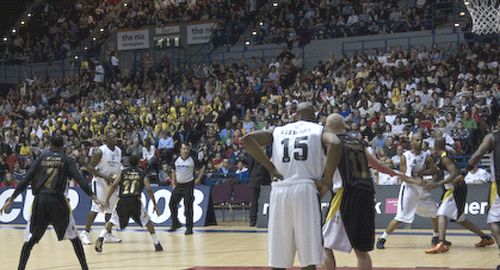 The Guildford Heat have won the BBL Trophy for the first time by beating the Newcastle Eagles 86-79 at the Plymouth Pavilions.

EJ Harrison scooped the MVP award after scoring 25 points, including 10 in the fourth quarter, as the Eagles were condemned to their second defeat in a major final this season.

Harrison’s score was matched by team mate Danny Gilbert, and Mike Martin had a double-double of 13 points and 12 rebounds. Lynard Stewart led all scorers with 26 points in vain for the Eagles.

In the fascinating early exchanges, it was the Heat that settled the fastest as, after four lead changes, Danny Gilbert and EJ Harrison scored a basket each to establish a lead for the Heat before Harrison fed Gilbert for an ‘alley-oop’ as part of an 8-0 burst that made the score 13-6. The Eagles hit back with the next three points before Dorsey made back-to-back baskets as the lead reached its first quarter peak at 17-9.

The momentum shifted from that moment as, through Olu Babalola, Jeremy Hyatt, and Fab Flournoy, the Eagles had the next 5 points. They began to assert themselves on the game over the first quarter break as Andrew Bridge and Steve Leven hit the last two baskets of the first stanza, before Flournoy opened the scoring in the second and Leven added a three to cap a 9-0 push for a 21-25 lead. The teams traded baskets before Andrew Bridge hit 5 points in a row as art of a further 7 unanswered points that made it 28-37 to the Eagles. Dorsey was called for a foul on Lynard Stewart, that also resulted in his being called for a technical foul and not featuring again in the game, but Stewart missed both free-throws on that occasion. He responded well, however, and made the final 6 points of the half for a 35-47 Newcastle lead.

The pendulum swung once more as the second half commenced, with the Heat posting a 13-3 run which included 5 points from Mike Martin, before drawing level at 51-51 on a James Jones three-pointer. Stewart responded once more with the next 5 points as the Eagles retained a small cushion. That changed with less than a minute to go in the third as Chi Lewis-Parry capped a 7-0 tear that saw the Heat snatch the lead back at 63-61 as they finished the third quarter 65-61 to the good.

In keeping with the manner of this game, the Eagles were not behind for long as Babalola scored 4 quick points early in the fourth period and the Eagles went up 65-66. Lewis-Parry (2) and Harrison (6) combined for the Heat as they posted an 8-2 run and led at 73-70 with 5:18 left. The teams traded baskets as not much more than a point separated them for the next 3:00 minutes, with the Heat holding the edge, and entering the final minute the Heat led 81-78 after another Harrison score. With 29 seconds remaining Danny Gilbert made the three-pointer that effectively sealed the game, before Hyatt failed to connect from long-range for the Eagles and Flournoy could only make 1/2 from the charity stripe. EJ Harrison held his nerve from the line and made 2/2 with 10.9 seconds left and the game was won.