Eagles with a Convincing 102-87 Win Over Worcester Wolves 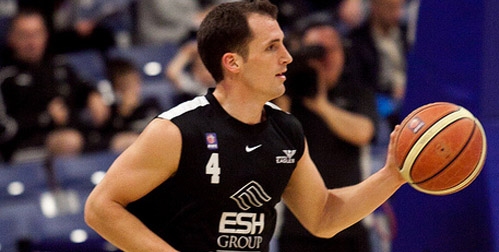 The Newcastle Eagles kept up the pressure on the Jelson Homes DMU Leicester Riders and ensured that the League title race in the BBL Championship moved into the Easter weekend thanks to a comfortable 87-102 victory over the Worcester Wolves at Worcester University on Tuesday evening.

In this must-win game for the Eagles, they started very strongly and stamped their authority on the contest early on as they leapt out to a 5-21 start to the game, including nine points from Damon Huffman and eight points from Charles Smith. The home side managed to get themselves back into the game as they finished the quarter strongly as they rattled off a 16-5 finish to the period to reduce the deficit back to just five points at 21-26 at the end of the opening stanza.
In the second quarter, a three-pointer from Arnas Kazlauskas got the home side to within five points at 27-32 early in the period, but this was as close as the Wolves would get for the remainder of the half as an Anthony Martin basket sparked the Eagles into action as they enjoyed a 13-4 run to take the score out to 31-47 midway through the quarter.

The Wolves got back to within eight points at 42-50, but a pair of Huffman three-pointers to finish the half saw the Eagles leading 44-56 as the teams headed into the locker rooms at the half.

In the second half, the Wolves bagged the opening six points of the third quarter to close to within six points at 50-56, but once again the Eagles stepped up their intensity and a 20-6 burst put them right in control of the contest as they opened up a 20 point lead at 58-78 inside the final minute of the period. The Eagles maintained that advantage at 60-80 heading into the final stanza.

In the final quarter, the Eagles enjoyed their biggest lead of the contest at 26 points with the score at 68-94 midway through the final quarter. The home side tried valiantly to get themselves back into the contest, but despite a strong finish to the game that saw them close the deficit back to 15 points by the end of the game, it was too little too late as the Eagles secured the all-important victory.

An impressive 40 point haul from Smith (pictured) for the Eagles led all scorers in the contest, while Alex Owumi led the Wolves with 26 points personal in the defeat.