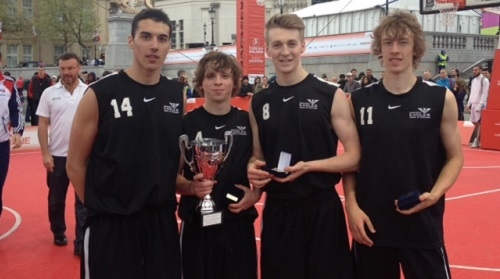 Eagles winning Proj3kt 3on3 team Eddie Matthew, Danny Horta-Darrington, Andrew Green and Alan Slasor took to the Euroleague FanFest court at Trafalgar Square today and ran away tournament champions once again, beating London United 28-17 to take the title. The win came after a slow start in the group stages and a one point victory over Worcester Wolves in the semi-final. London United beat a talented Leicester Riders team in their semi to make the final.

After the event, Eagles young star Danny Horta-Darington said; ‘It was an amazing experience to go to London and play at Trafalgar Square and winning the title just makes it even better!’

A big thanks go to Tyne Met College, Benfield Motor Group and LA Taxis for providing travel support for the players.

The Euroleague Basketball social corporate responsibility initiative One Team and the BBL Foundation joined forces at the Final Four Fan Zone in Trafalgar Square to promote the work that the two organisations carry out and promote the power of basketball as a tool to integrate communities in the United Kingdom.

The partnership centred around the promotion of the BBL’s recent Proj3kt 3on3 programme, in partnership with Sport England, which uses the 3on3 version of basketball to increase participation amongst the 16-19 years age group and to promote social inclusion in areas of the UK where there are BBL franchises.