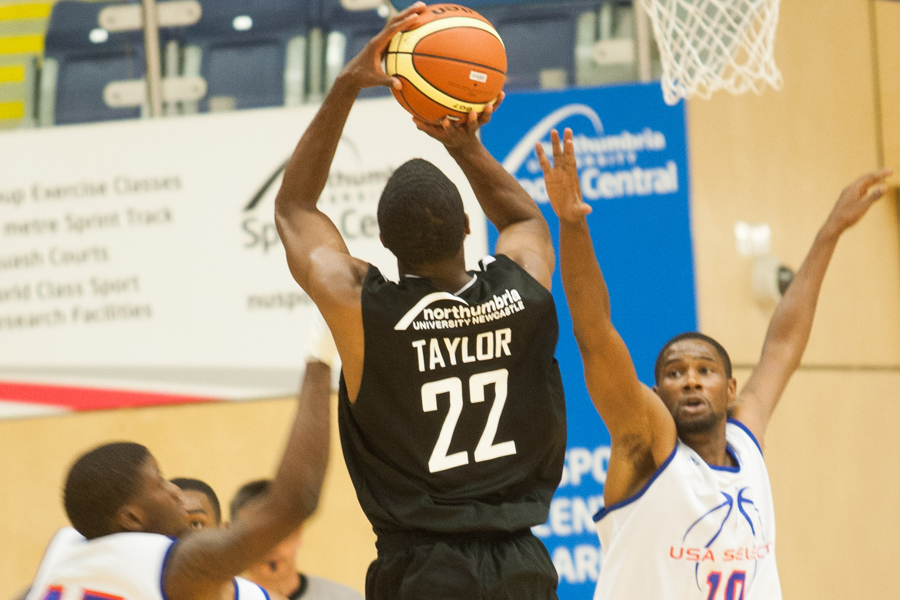 BBL newcomers Leeds were left in no doubt as to the task ahead of them as they felt the full force of Esh Group Eagles Newcastle’s strength with the home side crushing the rookies in another display of powerful basketball writes Jeff King.

And leading the way for the Eagles was Captain Charles Smith who led the 2nd quarter charge that ultimately burst the game open for his side. With the game still reasonably tight at 17 – 10 the man known as ‘The Prince’ reigned in 5 consecutive triples as Newcastle produced a 28 – 0 run that made the game safe by the half-time buzzer.

Smith ended the night with 8 long-range triples on his way to a marvellous haul of 28 points and was well supported by power forward Darius Defoe who netted 19 showing some strong inside moves.

There was another double-digit effort from new guard Ricky Taylor and a superb cameo from 18-year old Eddie Matthew who included one dreamy mazy full court dribble that took him past four Leeds defenders as he finished strong at the rim for 2 of his 9 personal.

Ultimately though it was Newcastle’s all-round strength and lock down defence that was the difference between the side’s as all ten Eagles on the roster got on the score-sheet and they restricted the visitors to a meagre 12 points in a pulsating and dominating 47 – 12 first half effort.

Head Coach Fab Flournoy was certainly pleased but had words of caution once again for his charges.

“At the half as we went in to the locker room I had to find little things to nitpick with the guys as we were as near as damn perfect in that first 20 minutes. Our defence will always be our key and we certainly turned that key hard and locked down Leeds in that first half which enabled us to create great offence at the other end.”

“I don’t often single players out and in fact don’t like to but what Chuck (Charles Smith) did in that second quarter was incredible. It wasn’t just about making the shots it was how smart he was to get open, recognise his mismatch and shoot the lights out.”

Certainly at the half Leeds must have wondered what had hit them as they slumped off to their locker room. But credit to their coaching staff, their pride and commitment as they came out full of energy with nothing to lose in the 3rd quarter and actually closed the gap.

But with Smith hitting two more triples in the final period, Eagles restored their advantage and took a confidence boosting win to make it two in two nights and win the North East Invitational Tournament.

“It was good to blow the rust off our legs and get some game time in,” commented Flournoy. “But, its back to practice now and to learn from what we’ve done and achieved in the last two nights.”

“I like where we are this early but I also don’t like where we are. This feels like a real good team but it’s not about peaking now, it’s being ready for those long cold winter months in January and February and making sure we maintain this level and don’t believe the hype.”

“It’s easy to climb the ladder but when you’re at the top it becomes difficult to stay up there when everyone is gunning for you and that’s exactly what the rest of the league is out to do, as they know they’ve got to come through Newcastle if they want to be successful.

The signs look good for The Eagles as they approach the season and Flournoy is hoping to get a couple of further practice games in to mix-up the preparations for the season and Friday 26th September when reigning BBL Play Off and Trophy winners Worcester Wolves roll in to town.