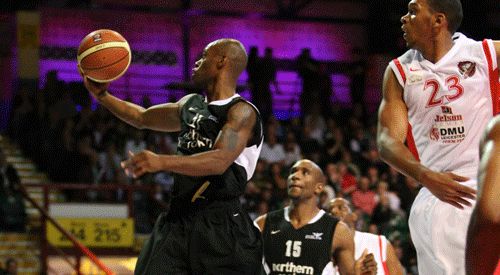 Newcastle Eagles maintained their 100% start to the 2009/10 BBL Championship season thanks to a hard-fought 112- 105 victory over the Jelson Homes DMU Leicester Riders at the Metro Radio Arena on Friday evening. Both sides started the game evenly matched and traded baskets throughout the early exchanges, but it was the home side who made the first break in the game as a Lynard Stewart basket instigated a 9-2 burst for the Eagles to take the score out to 26-16 with two minutes remaining in the quarter.

The Riders kept themselves in touch with Jason Johnson bagging the final four points of the quarter to leave the visitors trailing 30-24 at the end of the opening period. In the second period the Eagles started strongly as Darius Defoe netted the opening four points of the quarter, but the Riders responded immediately with a 9-2 burst of their own to trim the deficit back to a single point at 36- 35. Both teams traded baskets for the remainder of the period and with the game tied at 50-50 with a minute remaining in the half, Andrew Bridge and Reggie Jackson hit a three-pointer each in the closing stages to send the Eagles into the locker rooms leading 56-50 at the half. In the second half both sides began in the same way as the first half by trading baskets in the early going before an 11-4 run for the Eagles took the score out to 80-66, but Leicester kept themselves in the game with a 5-0 run to close out the third period trailing by nine points at 80-71 going into the final stanza. In the final period the home side broke the game open as back-to-back three pointers from Charles Smith set the Eagles onto an 8-0 burst to open up the final quarter and take the score out to 88-71. The Eagles kept extended their lead throughout the period and lead by as many as fifteen points at 94-79 midway through. The Riders were not going to give in without a fight and Tack Minor bagged ten points in a 15-2 Riders tear to get themselves back to within a point at 96-95.

A Jackson three-pointer immediately following that Riders burst put the Eagles back in control, and a further 12-2 run from the Eagles, including seven points from Charles Smith in the burst, took the score out to 111- 100 and ultimately give the home side the all-important victory. Jackson led all scorers in the game with 31 points for the Eagles, while Minor led the Riders scoring with 28 points personal.