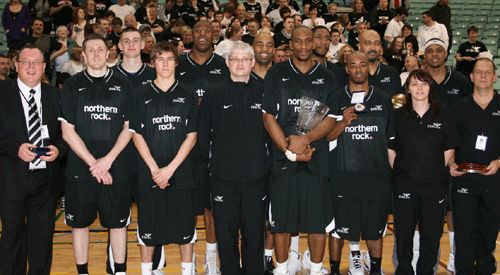 Newcastle Eagles 111 (24,64,89) (Smith 27, Chapman 21, Defoe 21)
Cheshire Jets 95 (15,42,63) (Myers 28, O’Reilly 18, Gayle/Marks 14
Newcastle Eagles have made BBL franchise history by becoming the most succesful franchise with 13 titles, 12 under the recent Eagles dynasty and one title whilst the franchise played as Sunderland. This surpasses the title owned by Alton Byrd’s Kingston Kings in the late Eighties and early Nineties, when Kingston took 11 titles and one futher title as the Guildford Kings, under the stewardship of head coach Kevin Cadle.

The Eagles turned in a superb all round team performance to retain their BBL Trophy crown with a 111-95 victory over Cheshire Jets at the Guildford Spectrum.

Veteran Charles Smith, who won the game’s Most Valuable Player award, and BBL rookie Joe Chapman proved too hot to handle from deep with 27 and 21 points respectively. It is the fourth time in six years Eagles have won the Trophy and the defeat is Jets second in a cup competition final this season.

Jets, hoping to make a good start, certainly did that as Colin O’Reilly’s three point play made it 7-0. The run seemed to spark Newcastle into life though as Lynard Stewart’s bucket began a 14-0 burst.

Smith’s three levelled it at 7-7 and Joe Chapman gave the Eagles their first lead of the match with a long range effort of his own. Newcastle’s first quarter lead peaked at nine, first at 18-9, and then on another Chapman three to close the period 24-15.

Reggie Jackson made it a double-digit (27-15) lead for Eagles with his first points of the match at the start of the second quarter.

Shawn Myers dragged Jets back into the match with two three point scores. The first, an ‘and one’ began an 8-0 Cheshire run. And the second, an effort from beyond the arc, reduced the gap to just three at 29-26.

Eagles quickly recovered their dominance though and over the second half of the second quarter they broke the game open with a 35-16 run. It was a devastating passage of play by Fab Flournoy’s team and left Jets staring at a 64-42 half time deficit.

Smith began the third quarter with a three to reinforce Eagles’ superiority and despite Jets occasionally picking apart the Newcastle defence they couldn’t stem the flow of points from their opponents.

MVP Smith made it a 28 point lead 88-60 from the free throw line as Newcastle took an 89-63 margin into the final stanza.

Newcastle’s lead peaked at 100-69 on yet another Smith bucket early in the fourth quarter. Despite trying to recapture the magic of their epic comeback in vain against Sheffield Sharks in the BBL Cup, Jets could only get the final deficit below 20 thanks to a late 6-0 run.

Jets, missing the injured James Hamilton, did have Shawn Myers lead all scorers with 28 points but were no match for a powerful Eagles line up that is so deep no player was on court for longer than 28 minutes of action.