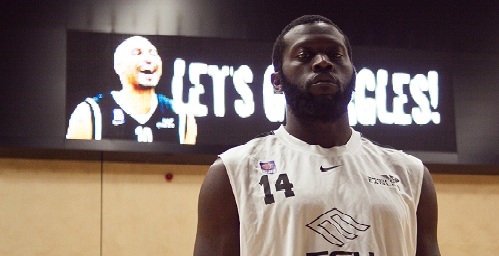 Newcastle Eagles have announced the signing of 25 year old England International Joe Ikhimnwin. The new recruit grew up around the site of the 2012 games in Stratford and played his first basketball at Barking Academy. The young star made his first appearance with London Leopards in EBL Division 1 at the age of 18. He then took the decision to take the college route in America, where he first spent 2 years in Junior College before being recruited to NCAA Division I college South Carolina State.

Joe played out his junior and senior years averaging 7 points and 4 rebounds per game. He also represented England in the Summer of 2010.

Eagles coach Fab Flournoy was pleased to see Joe join the team formally after a week with the club in early October; “Joe brings a great attitude and work ethic and we are sure he will fit into the mould. Joe is a young British talent who will help deepen our first team roster and I’m looking forward to seeing him contribute for the rest of the BBL season.”

The Eagles go into this Fridays BBL Championship tie against Leicester Riders, looking to tie their best ever start to a BBL campaign, a club record of 8-0 set in the 2011-12 season, on the road the clean sweep. Riders are also without a loss at this point, so a battle royal is expected for the first Sky Sports game of the new BBL season.