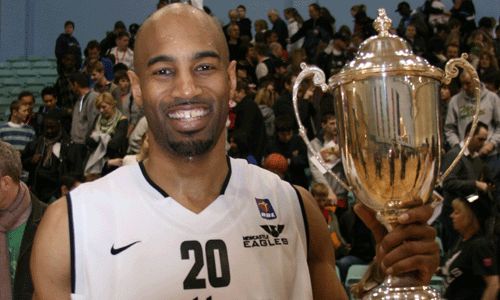 The Newcastle Eagles have been crowned BBL Champions for the second time in three seasons after taking the title from the Guildford Heat, on their rivals’ floor, with an amazing 101-108 overtime win behind 30 points from Steve Leven.

The Eagles have been carried to the title after winning fifteen of their last sixteen BBL Championship games and the win prevented the Heat from being the first team to sweep them since Brighton in 2003/04.

Fab Flournoy’s team came from 18 points down with an awesome fourth quarter display as big men Lynard Stewart and Darius Defoe backed up Leven. The former had 20 points and 12 rebounds, as he recorded his seventh straight double-double, whilst the latter added 18 points.

Trailing at 88-70, the Eagles opened the fourth quarter with a 9-1 push after good work from Defoe and Stewart and held the Heat scoreless for 5:00. Soon afterwards a technical foul was called on Heat Coach Paul James, resulting in two points for Steve Leven, before an Olu Babalola basket made it a one possession game at 96-94. With 18 seconds left, EJ Harrison was on the line for the Heat but missed both free-throws. Player/coach Flournoy was fouled for the Eagles and, with 14 seconds left, made 2/2 to tie the game and complete a 26-8 fourth quarter. Harrison missed a pull-up jump shot to win the game with 2 seconds left.

The newly crowned champions carried their momentum into overtime as they started with a 10-3 run, including four points each from Flornoy and Babalola, for a 99-106 lead within the last minute and the celebrations began soon afterwards.

Earlier in the game, the teams had played their way to a 10-10 tie before the Heat edged ahead after a Martin three and two from Gilbert. Back-to-back three-pointers from Flournoy and Leven tied the teams again at 19, before the Eagles hit 8 straight points, culminating with a Leven dunk, for a 21-27 lead. Four late points from former Eagle Dorsey saw the teams close at 30-31 after the opening ten minutes.

After the Heat took an early second quarter lead, Leven hit back-to-back three-pointers to see the Eagles 32-37 in front. A 7-2 run tied the game at 46, before a Martin basket soon afterwards gave the Heat the lead back. After a series of turnovers from the Eagles, the Heat went in at the break 63-55 to the good after Harrison and Martin combined for the last 5 points of the half.

GB squad member James Jones opened the third quarter with a triple to spark a 13-2 opening that stretched the Heat’s lead to 76-57. From that point, Jones’s fellow GB squad member, Steve Leven, took it upon himself to get the Eagles back into the game as he notched 7 straight points, but the Eagles still trailed at 88-70 before the unbelievable final stanza ensued.