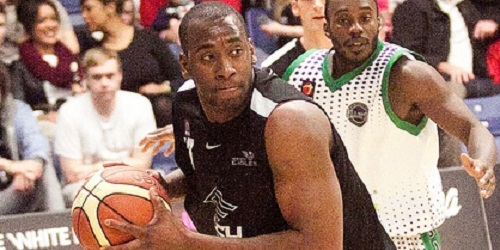 Marjon Plymouth Raiders moved up to third place in the BBL Championship on Friday night, holding off a late comeback effort to beat Newcastle Eagles 76-71 at Sport Central.

Raiders now join Worcester Wolves, Glasgow Rocks and Surrey Heat with 17 wins near the top of the BBL Championship table, but have played a game less than each of their rivals.

The defeat marks the first time Eagles have lost four home games in a row since 2001. Despite the loss Eagles remain second in the table with 40 points from 25 games. They sit 2 points behind leaders Jelson Homes DMU Leicester Riders and have played 2 more games than Riders, who face Raiders on Sunday.

Raiders’ Andreas Schreiber led all scorers with 26 points, in addition to 14 rebounds and a pair of blocked shots. Matt Schneck (pictured) scored 13 points for Raiders and had 16 rebounds to complete a double-double. Drew Lasker also had a double-double of 12 points and 14 rebounds, as well as 5 assists and 3 steals.

For Eagles, Darius Defoe was their leading scorer with 14 points. He also pulled down 9 rebounds and blocked 3 shots. Kareem Maddox had a double-double of 13 points and 13 rebounds.

Raiders seized control early on, going on a 21-3 tear to take a 29-11 lead inside of the first quarter. Former Eagles player Drew Lasker scored 7 points in the run as Raiders missed just 1 of their 10 field goal attempts.

Raiders extended the lead further in the second quarter, Matt Schneck scoring off Jamal Williams’ assist to put ahead 37-16. Eagles managed to reduce the lead down to sixteen points a few times, but they were unable to cut into it any further, allowing the Raiders to head into half time ahead 48-30.

Eagles came out of half time an improved side and forced their way back into the contest with an 18-5 run to take the Raiders’ lead down to seven points at 55-48 following a trey scored by Anthony Martin.

Raiders hit straight back, forcing the Eagles to miss their next seven field goal attempts with Schreiber and Lasker both blocking shots in that period. That allowed Raiders to score eight points in a row and take a 63-48 lead.

Eagles then once again pulled themselves back into the game, putting together a 17-6 run, reducing the Raiders’ lead to just 69-66 midway through the final period following a three-pointer scored by Charles Smith.

But Raiders kept Eagles from getting any closer, forcing Eagles to miss their next 5 shots and allowing Eagles just 2 points in the next three and a half minutes, scored by Joe Chapman from the free throw line. Raiders only managed 4 points in the same period – all of them scored by Schreiber as they extended their lead to 73-68.

Kareem Maddox finally broke the Eagles dry spell with 89 seconds to play, before Damon Huffman split a pair of free throws to make it 74-71, but Chapman and Smith would both miss 3-point efforts in the final minute, allowing the Raiders to see out a 76-71 victory at the free-throw line.