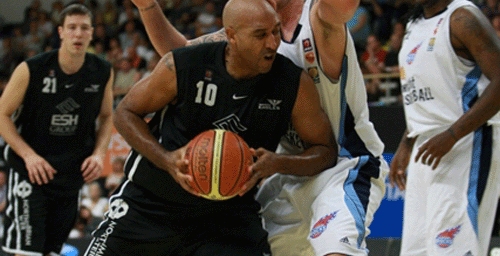 Glasgow Rocks ended their BBL Trophy campaign with a 76-70 victory over the Newcastle Eagles at Kelvin Hall on Sunday evening, but it was not enough to prevent the Eagles from progressing to the semi-finals of the competition.

In a tight game throughout it was the Rocks who started the game the stronger as they opened up an early 15-8 lead off the back of a 6-0 burst, but the Eagles responded immediately with a 8-0 tear of their own to end the opening quarter leading by a single point at 15-16.

In the second quarter, the Eagles extended their lead off the back of a 7-2 burst to take the score out to 23-28, but the Rocks came right back into the contest with a 7-2 run to tie the game up at 30-30 and the contest remained tied as the teams headed into the locker rooms tied at 34-34 at the half.

In the second half the Eagles bagged the first five points of the third period culminating with a Joe Chapman three-pointer to take the score out to 34-39, but an EJ Harrison three-pointer in response sparked an impressive 14-2 run for the home side to take the score out to 48-41. The Eagles got themselves right back into the game and tied it all up once again at 50-50, but the home side kept their noses in front as they headed into the final stanza leading 56-55.

In the final quarter, the Eagles tied the game up once again at 60-60 with 6:49 remaining, but the Rocks broke the game open with an 11-3 tear to take the score out to 71-63 with 3:50 left in the contest. The Eagles tried valiantly to get themselves back into the contest and closed the gap back to just three-points at 71-68 with two minutes remaining but they could get no closer as the Rocks held on for the victory.

Harrison led all scorers in the contest with 22 points for the home side, while Charles Smith led the Eagles with a team-high 18 points.