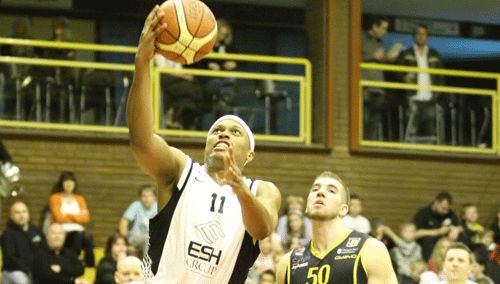 The Eagles ended the regular season with defeat but safe in the knowledge that the result would make no difference to their playoff placing.

Jelson Homes DMU Leicester Riders will go into the final match of the season in seventh position after an 87-81 win over Newcastle Eagles.

It was the Riders’ ninth consecutive home win and owed much to their ability to convert from the free throw line. JR Blount and Ryan Zamroz both made crucial shots from the line to seal the win.

With second place in the BBL Championship already assured the Eagles looked in the mood to end the season with a victory. A Darius Defoe dunk ended a 7-16 start to the match.

After going behind 23-26 Leicester enjoyed the rest of the first half. Five points by Tom Sherlock gave Riders the lead and they moved it out to 38-31 on two James Whyte free throws.

Andrew Bridge reduced the arrears with a three for Eagles before JR Blount made two from the line to give Riders a 45-40 advantage at the interval.

Eagles shaved the Riders lead to 55-53 on a Charles Smith two but Leicester’s Frank Holmes scored five points in a 7-2 run to help his new club to 65-61 heading into the final quarter.

After Eagles had taken a 77-78 lead a 6-1 Riders burst gave them an 83-79 advantage. Fab Flournoy cut the gap with a lay-up but two from the line by Zamroz and a put-back from Joe Harris on the buzzer ensured a Leicester victory.