Eagles Off To A Flying Start

Newcastle Eagles/News/Eagles Off To A Flying Start 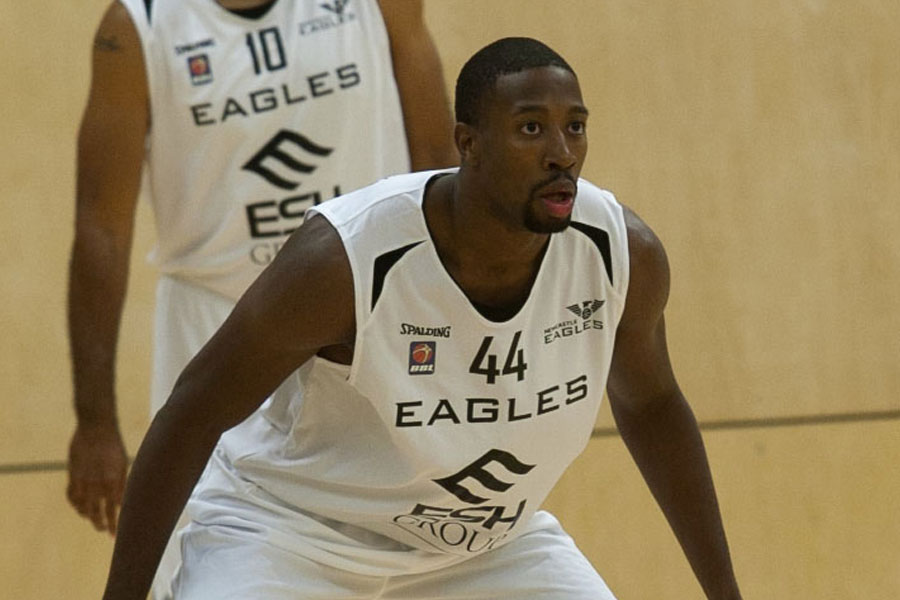 The new-look Newcastle Eagles got their pre-season campaign off to a winning start with a good, workmanlike performance against a determined and spirited young Northumbria side who gave them a nice work-out to help ease the rust of the summer’s rest.

Eagles fielded no fewer than six new faces in their roster with starts for new US imports Malik Cooke and Scott Martin and Paul Gause returning to Sport Central after a year away made up the starting five with Eagles veterans Charles Smith and Darius Defoe.

There was also a return to Newcastle colours for Drew Lasker who had a brief spell with the Eagles towards the back end of the 2010/11 season. Shooting star Eddie Matthew was also back alongside new boy Stu ‘brother of Andy’ Thomson. With Fab Flournoy sitting out playing duties due to a slight niggle, the Eagles gave a trial to 6’ 7” English forward Spencer Wells.

Marc Steutel’s Northumbria line-up was missing a few bodies that will be needed for the tough season ahead in EBL Division 1 but it was nice to see ex-Eagle Jamie Glen in their ranks along with three youngsters who have all come through the Eagles School of Excellence programme in Ellory Browne, Danny Horta and Alex Parr.

Steutel’s starting five included Glen, alongside US point guard Mick Di Stasio, new recruit Jack Preston who has spent some time in the US at Augustana University and returnees from last season, Jack Thompson and Garnett Watson. Scotland Under-18 international Gregor Grey and ex-Leeds Carnegie guard Ollie Hannon made up the Northumbria bench.

It was Eagles and Cooke who opened the season’s scoring as he was fouled converting his first Newcastle bucket and made the and1 for a three-point play. This was quickly followed by a Gause deuce and the Eagles were off and running opening a lead they would never relinquish.

Di Stasio and Glen looked prominent for Northumbria but once Defoe got in to his stride and started making waves inside Newcastle began to pull away early from their less experienced opposition and led 22 – 11 after a first quarter which also saw Thomson register his first Eagles points with the first triple of the game.

One down-side for The Eagles was the loss of Smith early in the game after he’d knocked down his first two of the game he came down awkwardly and turned his ankle slightly. With a long season ahead and plenty bigger fish to fry, Head Coach Flournoy was quick to pull his trusted veteran out of the line-up and wrap him up for the rest of the night.

The second period saw Matthew score with his first touch and Newcastle pour in 30 points, Cooke in particular looking potent and Martin joining the scoring roll with a couple of triples. By the half with a 52 – 29 gap established all playing Eagles had registered with the scorers table. Northumbria were certainly competing but for every basket they scored the Eagles seemed to score two as they extended their lead.

The likes of Thomson and Lasker in particular were showing the depth that Newcastle hope will hold them in good stead and both made significant contributions with Cooke and Defoe to help their side take the third ten minute section 21 – 13 to extend Newcastle’s advantage to 73 – 42 with ten minutes to play.

And the Eagles thanks to another Thomson triple and two late baskets from Martin also took the final quarter to complete a convincing 86 – 54 final scoreline. Defoe led the way with a game-high 20 points and there were double-figure returns in the first Eagles effort for Cooke, Martin and Thomson.

For Northumbria, Di Stasio certainly impressed and looks a good edition to their squad whilst Captain Glen was his usual solid self and led from the front for his young team-mates most of which managed to register some points against their more illustrious opponents.

Both coaches could take positives from the night’s work with The Eagles defence looking solid if not perfect and offensively they carried a threat all over the court. Northumbria ran hard and competed hard for the full forty minutes as a good contingent of Eagles and local basketball fans enjoyed an entertaining affair to kick-start the 20013/14 season.