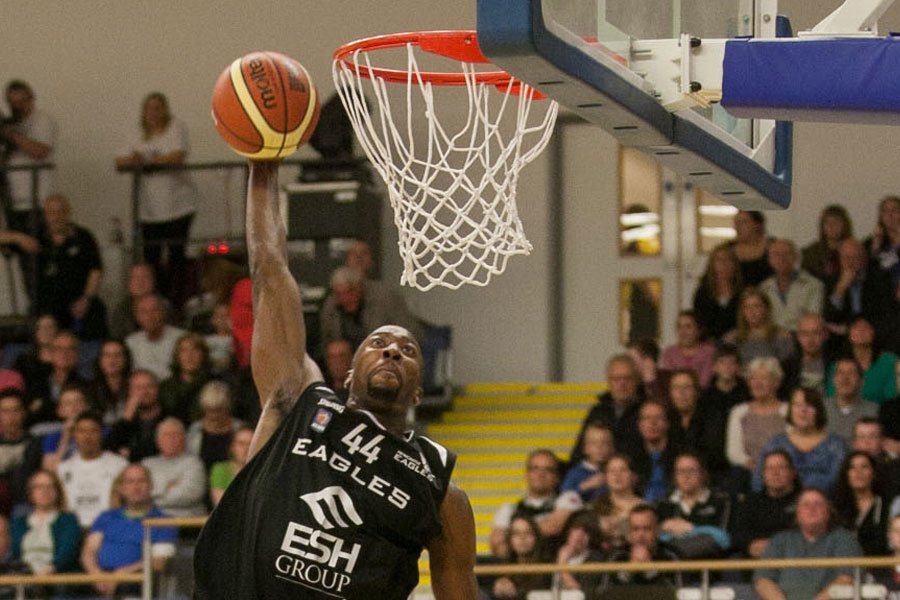 Esh Group Eagles Newcastle have taken a significant step towards a fifth BBL Championship title in seven years after overcoming third-placed rivals One Health Sharks Sheffield by 82-78 at Sport Central, to take the crucial head-to-head between the teams. The Eagles have won nine in a row – with their last defeat being to Sheffield in February – and have won 13 straight at home, dating back to October.

Malik Cooke (pictured) had a big double-double of 19 points and 12 rebounds, with Darius Defoe matching his points tally. BJ Holmes, for the Sharks, led all scorers in vain with 24 points including 6/9 three-pointers to keep his team in the game.

Defoe had 11 points in a first quarter that was broken open when Paul Gause and Scott Martin scored consecutive three-pointers in 20 seconds. Another Gause triple contributed to an 11-3 spell, and when Flournoy added another to open the second stanza the Eagles were up 30-18.

But they wouldn’t have it all their own way in the first half, as they were then held scoreless for two and a half minutes, while Demetrius Jemison got the Sharks going with six points in a row, sparking a comeback in the run up to half time. BJ Holmes made a three-pointer with 2.32 to play that ignited an amazing 12-2 finish as Tuck scored consecutively and Holmes capped the run with a buzzer-beating three-pointer to tie the teams at 41.

And that story was repeated in the second half, as the Eagles came out on fire, with a massive 13-2 push as Martin scored five and the Sharks were allowed just one basket in four and a half minutes. The visitors edged their way back into the game, and narrowed it to one shot at 61-59 through Babalola at the outset of the decisive fourth quarter.

Charles Smith temporarily settled the Eagles with a three-pointer, but scores from Nick Lewis and Holmes saw the Sharks take their first lead of the game at 72-73. But it would be the only time they led as Cooke was fouled in the act of shooting from long-range and made all three free-throws, before Defoe scored a put-back for 77-73 heading into the final minute. Holmes’s triple gave the Sharks hope at 80-78 with 15 seconds to play, but Cooke was there to win the game from the free-throw line.

Eagles can now secure the title next weekend with wins over Birmingham and Surrey.