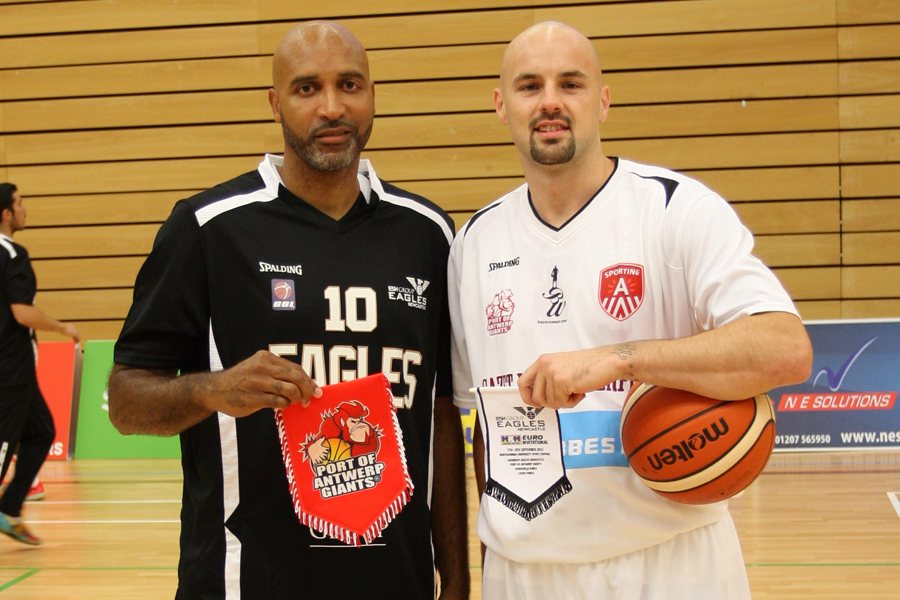 “This is something we’ve wanted to try for a long time and we really needed to dip our toes in the water and investigate European competition. I think now that the dust has settled we can be pleased with our efforts in hosting the event and the lessons we learnt which will stand us in good stead for the future.”

“There’s no doubting it was an ambitious project for us to undertake and I think we did a good job of hosting two top class European Clubs, bringing a real fresh approach to our pre-season and giving our fans a real treat to build the excitement for our forthcoming season.”

Day 1 of the Invitational saw Swedish Champions Sodertalje Kings lay down a real marker with a fast, athletic, powerful display of basketball at both ends of the court which resulted in an impressive 86 – 32 win over Newcastle’s fellow BBL colleagues Leeds Force.

Next up was the Eagles clash with Port of Antwerp Giants who play in the very powerful and well sponsored Belgian Scooore League as well as competing in the FIBA Europe Cup.

This was always going to be a tough test for Fab Flournoy and his players and so it proved as The Eagles slipped to a 103 – 78 defeat, despite 20 points from forward Darius Defoe, something they aren’t accustomed to on their own court.

Newcastle competed well with their more experienced and powerful opponents who included no less than six USA based players in their side and quite often got close to bringing the game level. But The Belgians always seemed to find another level and in the final quarter pulled away as their experience and understanding of European competition proved the telling factor.

The second day saw The Eagles bounce back in fine style as led by 21 points by Andy Thomson and 18 from Scott Martin they saw off Leeds to the tune of a 94 – 55 score line. But the game of the night was undoubtedly the clash between Sodertalje and Antwerp.

A real high quality affair that showcased a style of hard-nosed basketball and two fine sides saw The Belgians once again net a great win 77 – 70 over their Swedish opponents who fought hard all the way and were within a shot of the victors right up to the final minute of the contest.

The curtain came down on day 3 with the final game of a hugely successful event between the hometown Eagles and Sweden’s basketball Champions Sodertalje Kings, and what a game it was.

Both sides showed tremendous spirit and character as they played out a game that was more suited to a Play-Off Final than a pre-season game. The Eagles down by ten with less than five minutes to play levelled the game on two Martin free-throws and then led by Andy Thomson, who had 27 points on the night, edged home 87 – 84 in over-time in front of a great and loud Eagles support.

“I have to thank our fans for coming along and supporting not only our team but also giving our visitors such a warm welcome to Newcastle over the three days. The atmosphere against Sodertalje was incredible for such a close and exciting pre-season game.”

“I believe that if we build on the lessons we learned going forward we can repeat this tournament again next year and perhaps even bring in a third European team. We need to sit down as a Club and assess what went well and what we need to improve on.”

“There’s no denying that all at The Eagles would love to take that next step and enter in to a European competition. That’s been our goal for some time and I think these 3 days have proved we’re on the right track and could take that next step.”

“Of course, we’d need further investment and facility availability is also an issue we would need to solve. We’d like to give a big thanks to MKM Building Supplies for their support for this event. Moving in to Europe would open up so many opportunities both for ourselves and British basketball which is important.”