Eagles Make It SIX Trophy Finals In A Row!

Newcastle Eagles/News/Eagles Make It SIX Trophy Finals In A Row! 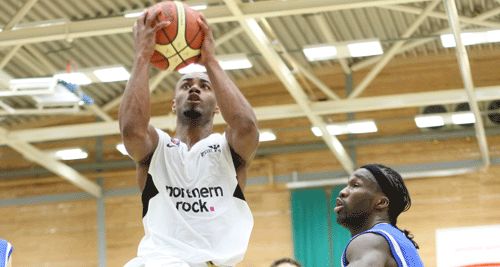 The Newcastle Eagles are the first team in this year’s BBL Trophy Final, as a 91-96 win tonight saw them reach an aggregate score of 185-176 over their title rivals from last year. The Eagles were led by an in-form Joe Chapman, who hit 21 points, whilst Charles Smith and Lynard Stewart had 18 points each, and leading all scorers in the game was Olu Babalola for the Tigers (23 points). Jerome Gumbs and James Jones supported Babalola with 21 and 19 points respectively.

It was the Tigers who got off to a narrowly better start in the 2nd leg of the BBL Trophy Semi Final tonight, as they finished the quarter up 25-20. New signing Marcell Jones scored the first basket of the game off an Olu Babalola assist, and Babalola then followed up his good work with a lay up of his own to tie the scores early on, after Andrew Sullivan had scored for the Eagles. A three pointer from Charles Smith then gave the eagles a 2-5 cushion lead, only for Everton bounce back through another basket from Babalola. Neck and neck for the next few minutes, the sides exchanged scores until a Smith free throw tied the scoreline again at 11-11. Babalola continued to do damage for the hosts, whilst the Eagles shared the scoring around, but neither side had more than a five point advantage at this point in the game.

It was in the second quarter when the Tigers really got going, as after Joe Chapman had tied it at 31 a piece for the Eagles, Tony Garbelotto’s side went on an 18-5 run capped off by a Jerome Gumbs lay in, as they went into the locker rooms 49-39 ahead in this all-important game.

In the third period, the game took an interesting turn. After the Tigers stretched out their lead to 52-45, the Eagles then went on a 12-10 run to regain the lead at 62-67. British big pair Andrew Sullivan and Darius Defoe combined for 12 points in the stanza, with the assist help of point guard Reggie Jackson, as Sullivan’s dunk capped off the period which saw the Eagles re-establish their threat in the game, as they led 62-67 going into the final quarter.

A three pointer from Joe Chapman off yet another Reggie Jackson pass, pushed the Eagles out to 70-63, after Jerome Gumbs had made a free throw for the Tigers within the first ten seconds of the final quarter. Gumbs then slotted two more home from the line, whilst Jackson and Stewart added a field goal each for the Eagles, to nudge them nine points ahead with 8:29 left in the game. The sides then traded baskets until another Chapman trey stretched Newcastle’s lead to double digits at 67-77. The Tigers were not about to give up though, as Andrew Thomson found Babalola for a triple, and James Jones knocked down a shot from behind the arc. However, Chapman was proving unstoppable, as his third three pointer of the period took the score out to 78-85 in the Eagles favour.

The Tigers then launched a remarkable last gasp comeback, as they went on an 18-9 charge which took them to within two points of the visitors, at 91-93, but free throws from Sullivan and Chapman in the last minute proved too much for the Tigers, and the Eagles clinched their place in the BBL Trophy Final with a 91-96 victory.