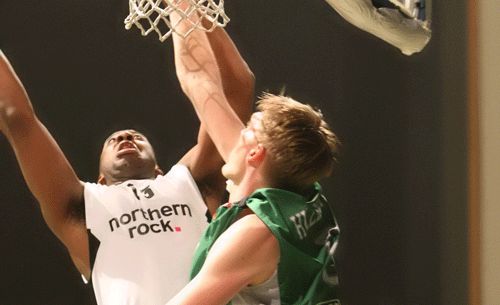 After Florentino Valencia had made two free throws to force overtime, the match was undecided until an Anthony Martin (pictured) bucket with 50 seconds remaining in the extra period gave Raiders the lead for good.

Earlier Darius Defoe carried the Eagles offence in an even first quarter at the Pavilions. Scoring the first eight points for his team, Defoe helped Newcastle to a 10-18 lead before the home side went on a 17-6 run to go in front. Veteran Charles Smith hit the final basket of the quarter to give Eagles a 27-28 advantage.

Smith continued to trouble the Raiders defence in the second quarter. His six points formed the bulk of a 10- 4 run to give Eagles a 31-38 lead.

Terry Horton and Florentino Valencia combined for nine points to bring Plymouth level at 40-40 before Smith and a Reggie Jackson three put Newcastle 40- 45 up at half time.

Newcastle again let throughout the third quarter with their lead peaking at eight several times. A 14-4 run by Raiders, inspired by Allister Gall and Martin, briefly gave them the lead at 65-63 before the teams headed into the final stanza locked at 67-67.

Neither side could break free in the fourth quarter with Eagles holding the biggest lead at four (75-79). Charles Smith almost won it in regulation with a three to make it 82-84 but he fouled Valencia with 10 seconds remaining and the Raiders player calmly slotted both free throws to send the match into overtime.