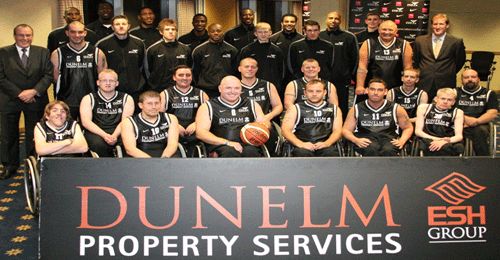 The new team announcement came on Thursday 2nd October, when the Eagles hosted a launch event at the Newcastle Gateshead Hilton, bringing together the new superleague team – sponsored by Dunelm Property Services – and the Eagles’ British Basketball League (BBL) players – backed by Northern Rock – to celebrate the new venture which will place even more of the region’s talented sports people under the national spotlight.

With ex-GB player Lee Fawcett at the helm as Captain, the team are optimistic about their first game on Sunday 19th October in Oldham, and looking forward to returning to the region for their first home game at Percy Hedley Academy for Disability Sports on Saturday 8th November.

Great Britain is currently making a name for itself in the Paralympic Wheelchair Basketball stakes, having defeated the United States at this year’s Olympics, with GB’s Terence Bywater as top scorer with a total of 32 points.

Newcastle Eagles’ Managing Director, Paul Blake, said: “The popularity of basketball is soaring in the UK at the moment. The Eagles’ BBL team celebrated a triumphant victory in front of a huge crowd at the end of September in the first game of the season, and now – following the GB basketball team’s immense success in the Beijing Paralympics this year – we see our new team hit the superleague in what’s sure to be a highly competitive and dynamic competition.”

Stephen Francis, Managing Director of Dunelm Property Services, sponsors of the Eagles GBWBA team, added: “We are pleased to be involved with the team as part of our support of the communities in which we work. All our clients provide housing in the region and a number of them benefit from the involvement of the Eagles’ Community Foundation and the Eagles’ players, and this is our way of supporting this excellent work. We wish the Eagles GBWBA team well in their first season!”

The home games will take place at the Percy Hedley Academy for Disability Sports in Killingworth, North Tyneside. Adam Parry, Sports Development Manager for the Percy Hedley Foundation and Eagles GBWBA superleague team player is thrilled that the two organisations have joined forces to promote wheelchair basketball within the region.

Adam said: “Percy Hedley has a strong track record developing all kinds of sports for participants with disabilities, and, as wheelchair basketball has been going strong in the region for some time, this new partnership means we can draw on a wealth of experience to bring the sport to a much wider audience. Having the weight of the Eagles’ brand behind us adds significantly to the sport’s appeal and together we feel we can create a sustainable basketball infrastructure for our participants. We currently have teams at every level in the league – from juniors through to professionals – and look forward to seeing our young players become the Paralympic stars of the future!”