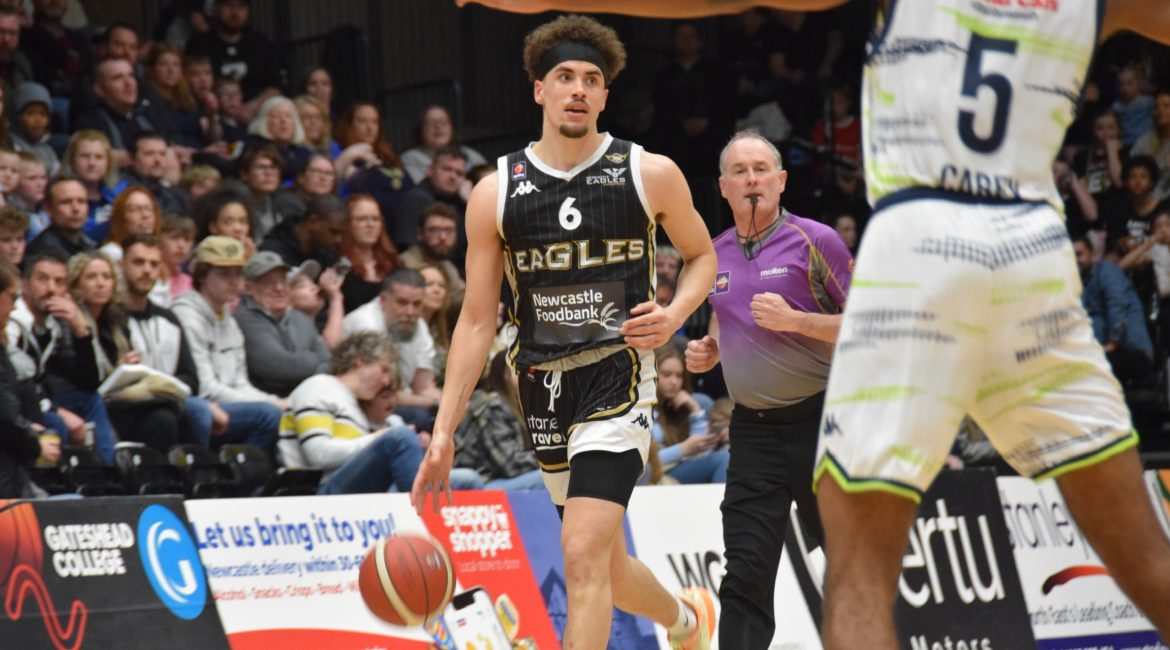 On Friday night in the Vertu Motors Arena the Newcastle Eagles slipped to a sixth successive defeat in the BBL going down 90 – 75 against the BBL Trophy winners, Cheshire Phoenix.

It means the Eagles go into the Easter weekend still far from certain of qualifying for the end-of-season playoffs.

The drama on court was proceeded by the drama off it. Somehow, some way Newcastle seem to have upset the basketball gods this season as setback after setback has hit Head Coach Ian MacLeod’s men.

The latest was when the spectre of COVID raised it’s ugly head again and restricted Newcastle’s already short-handed roster. They were no sooner celebrating the return of Wes Person Jr. following illness to the roster when the news broke that on-court general, captain and inspirational leader Rahmon Fletcher was out having to follow COVID protocols.

Whilst no one player is irreplaceable, Fletcher in the current scheme of things at Newcastle is as close as it comes. It meant that for Newcastle to have any chance against a strong Cheshire side all players had to step-up.

In the end though Newcastle just didn’t have enough. They did lead by five points after the first quarter and were only down three at the half. The third quarter has been their nemesis this season but this one although they lost it still saw them within touch as they entered the final ten minutes only down 65 – 77.

But it was still a gap too far for a Newcastle side that can’t seem to catch a break right now and ultimately Cheshire’s superior defence led to cohesive offence and they saw out the game in fine style to take a deserved win and further enhance the Eagles play-off worries.

Newcastle did have six players in double-figures and were led by MVP Corey Johnson who had 16 points, 5 rebounds and 5 assists. The Canadian gave his assessment of the game and hopes for his side going forward.

“Once again we were short on players. Missing Fletch was tough for us. Obviously our point guard being so important to us. I thought we did a good job in the first half at least picking up the slack, being aggressive as individuals and as a team.”

“I feel like they took advantage of some breakdowns in the second half and kept making shots. Levi Bradley played very well and Namon Wright had a very good game as well. Definitely all the credit goes to them. They are a good team so congrats to them.”

“Fletch’s playing style and standards set the bar for us and his assists too were all things we were missing tonight. But hopefully he’s good for next week and we get him back soon.”

Next weekend is a huge one for Newcastle. Home and away games against one of their main rivals for a play-off spot sandwiching a trip to bottom of the table Surrey Scorchers may well define their final league position.

“The season is kind of coming down to these three games. Obviously it’s not the ideal situation but we still have a chance. We just have to take it one game at a time and see what we can do and where it takes us.”

“The Cheshire defence on us especially in the second half was probably key. They have some great on-ball defenders which caused us problems and we still have a lot to work on. But I think we’ll be good next week if we’ve got everyone back.”

One of the noticeable things on the night against Cheshire was the support from another packed arena. It showed the fans are still with this Eagles side and Johnson paid tribute to them.

“The fans have been great all season and regardless of our results or circumstances they’ve been behind us all the way. We really appreciate them as they always give us energy. What we need to do is give them some wins and cement a play-off berth to thank them for their support.”