Eagles Go Back Top For a Perfect Weekend

Newcastle Eagles/News/Eagles Go Back Top For a Perfect Weekend 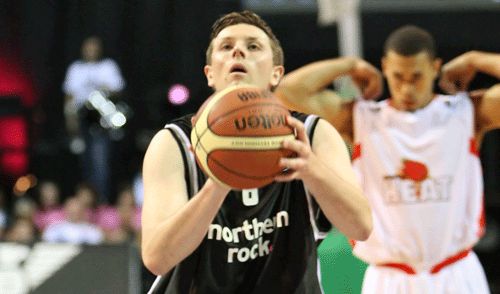 Newcastle Eagles moved two points clear at the top of the BBL Championship table thanks to a 85-87 victory over the Sheffield Sharks at the EIS, Sheffield on Sunday afternoon.

The visitors lead 78-87 going into the closing stages of the game but Chris Sanders bagged two free- throws followed by a three-pointer from the next possession for the Sharks to close the gap to four points at 83-87 with less than one minute remaining.

Sherman Rivers then secured a two-pointer for the home side to make it 85-87 going into the final 30 seconds of the game.

The Sharks had a chance to win the game with eight seconds remaining but Rivers’ shot was blocked by the Eagles and the visitors held on for the all- important victory.

Earlier in the game, the Eagles started the game the stronger with a 6-2 run to take it out to 11-22, but a 9-4 response from the Sharks got them back to within six points at 20-26 heading into the closing stages of the opening period.

In the second quarter the Sharks enjoyed more of the game and a run of 8-0 midway through the period and a 7-0 burst to close out the half saw the home side trailing by a single point at 41-42 heading into the locker rooms at the half.

In the second half the Eagles began to restamp their authority on the game and an 8-2 tear midway through the third quarter saw the visitors take the score out to 54-62. The Eagles maintained their advantage throughout the remainder of the period and lead 61- 72 heading into the final stanza.

In the final stanza a 6-0 Eagles burst gave them their biggest lead of the game at 65-79, but the Sharks were not going to give up easily, and a 9-2 run of their own trimmed the deficit back to 74-81 before the fireworks of the closing stages occurred.

Sanders led the scoring for the Sharks with 19 points, while Trey Moore was the Eagles’ leading points scorer with 19 points personal as well.