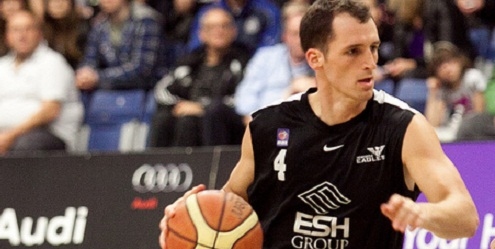 Despite the poor weather the Eagles (as at 5.30pm) will still be playing tonight at Sport Central against Sheffield Sharks. The club are looking to bounce back from their BBL Cup final loss when they host One Health Sharks Sheffield on Friday evening.

The Eagles went down 85-80 against Jelson Homes DMU Leicester Riders in front of a packed house at the NIA as their dreams of repeating last season’s clean-sweep came to an end.

However, Fabulous Flournoy’s team still have everything to play for, and go into Friday’s match-up tied with Riders at the top of the table having won 14 of their first 16 BBL Championship games. With four victories in their last six Championship games, Sharks are now up to eighth in the table with a 7-10 record.

It will be the first meeting between the two clubs this season, but the Eagles won all five games against the Sharks last season, including a two leg BBL Trophy semi-final. While Eagles have won eight of the last ten meetings between the teams, it’s Sharks who narrowly lead the all-time series 41-40.

The game will see the return of former Eagles forward Andrew Bridge to his old club, and the 33-year-old is looking forward to facing his former team: “I’m looking forward to going back and seeing people that I’ve not seen for a while. I had ten great years of my life there but everyone has to move on at some point. It’ll be quite emotional, but as a team we have to focus on doing things we need to t get chance of winning the games. It’s a good test for us as to how we play against one of the better teams, so far we haven’t played well against teams at the top consistently. ”

Bridge admits that it’s tough to single out which players are key for the Eagles: “It’s almost take your pick. Joe [Chapman, pictured] is an excellent player and Charles [Smith] has been a great player for ten years. Fab’s a massive key for them, and wheat he does on the court often goes unnoticed. He scored 12 points in the last quarter of the final, and couldn’t miss, and that’s without even talking about his defence. Knowing most of the group, they’ll be hurting from what happened look to bounce back. I’ve been in that situation with them and Fab will get everyone ready to play and will be focused on the three remaining trophies.”

Sharks made it five wins in their last seven BBL Championship games with a 99-64 success at strugglers Mersey Tigers last week, and Bridge was pleased with the win: “It was a good game for us, we stated well which important, and had solid contributions from everyone with anyone doing anything spectacular. To give Mersey credit, they played hard but are clearly lacking a bit of confidence.”

Eagles’ player-coach Fab Flournoy is looking for his side to get over their Cup final disappointment, but expects a tough game against the Sharks: “We haven’t played Sheffield yet so will have to get up to speed with their personnel. They certainly seem to have turned around their season over the past weeks with the introduction of BJ Holmes to run the team. They will be coming in to this game with a lot of confidence given their recent results.

“We really weren’t consistent enough over 40 minutes against Riders. We started off shooting the ball poorly despite getting some good looks and played a very poor second quarter.

“I thought our energy increased and we found some rhythm in the second half but ultimately the hole that we dug for ourselves was just a little too deep. Joe [Chapman] led by example for us but overall too many little things did not go our way.

“For Leicester Jay Cousinard really hurt us when he went off in the third quarter but I also thought Calvo played an excellent floor game and Jamell Anderson picked a heck of a time to make his only two threes of the season!

“It’s a long year so we just have to use the pain of the defeat to fuel us over the next few weeks.”

Flournoy admitted that his team schedule in the build-up to the final hadn’t helped their preparation: “The combination of the time we have had off and the injuries we had through December probably did hurt us a little. Shooting 0/7 from three in the first quarter kind of demonstrates that and it was only Charles’ second game in about seven weeks which meant he was looking for rhythm throughout as well. But on the flip side we were energetic throughout, had 17 offensive rebounds and enough good looks to win the game because of the energy we had. So we certainly can’t use it as an excuse.”

Flournoy goes into Friday’s match-up needing four more rebounds to reach the 3000 milestone, while Bridge needs one more turnover to hit the unwanted 500 mark. Charles Smith also goes into the game on the verge of a milestone, needing one more block to record his 200th in BBL Championship games.