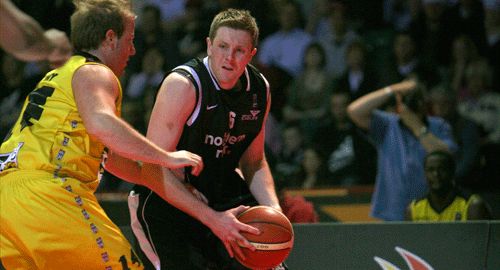 ANDREW BRIDGE insists Newcastle are not thinking about a fourth Play-off crown on the bounce.

Because the Eagles are already dreaming of a FIFTH!

The reigning champions head into next weekend’s Final Fours in Birmingham on the back of six successive wins.

All those victories have come against top eight opposition and Bridgey’s boys have never looked in better shape to set a new record.

Only three teams in UK hoops history have claimed three successive Play-off titles and Newcastle can become the first franchise to rip four in a row.

But Bridge said: “Right now it’s just another number. Winning four in a row simply gives us the platform to win five, six or seven.

“Every trophy we win is a springboard towards the next one and that’s always the way we’ve looked at it.

“We are focused on winning Saturday’s semi-final because that gives us the opportunity to win another final.

“The guys that have been around for the past four years might have won eight pieces of silverware but we all want to win a ninth.

“And we’re all aiming to be around next year to win a 10th.”

Bridge’s single-minded approach to success is a mirror image of player- boss Fab Flournoy’s attitude and the New Yorker continues to set the tone on Tyneside.

A frontrunner to win this season’s BBL Coach of the Year award, the ambitious playcaller’s relentless pursuit of perfection leaves his rivals standing.

And Bridge – Fab’s first signing as Eagles’ boss – has always bought into his mentor’s unflinching philosophy.

“If we had won our finals this year then everyone would have been talking about another clean sweep instead of a fourth Play-off crown,” added Bridge.

“And that’s what we wanted the fans to be talking about right now. But those games have come and gone and we can only win what’s in front of us.”

But 2008 BBL Cup winners Milton Keynes remain the most obvious threat to an Eagles side still smarting from that Plymouth Pavilions defeat.

“I think the outcome of the 2008 Play-offs will depend upon which franchise has the most strength in depth and which players perform best off the bench,” added Bridge.

“That’s why I’m very confident we can do the job. We’ve been playing with eight players a night now for some time and we’ve come through an injury crisis missing Charles [Smith] and Jeremy [Hyatt].

“But we may have to go even deeper next weekend. Two high-intensity back-to-back games will bring other guys into play and the likes of Brian [McCotter], Sam [Attah], Aaron [Nielsen] and Will [Spragg] are going top see some minutes.

“That’s what they train for every day of every week and they will relish the chance. But we are lucky we have that kind of back-up.

“I think Milton Keynes will be a threat for the same reason. Over two days they are best equipped to challenge us because of their own strength in depth.

“Their bench runs very deep and that’s what accounted for the Rocks in the first quarter-final. Sterling has a very talented starting five but after that they don’t have too many options.

“It’s what cost them their place in Birmingham and probably what helped ourselves and the Lions make it to the 2008 Play-offs.”