Eagles Drop One To Rocks

Newcastle Eagles/News/Eagles Drop One To Rocks 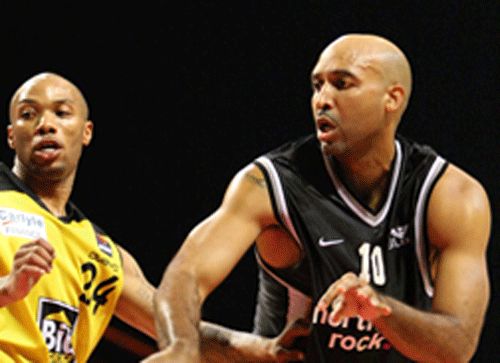 The Scottish Rocks prevailed in one of the BBL’s biggest grudge matches, to move up to third place in the BBL Championship, as they beat the league- leading Newcastle Eagles by 89-74 in Glasgow.

It is the third time in the last 12 months that the Rocks have beaten the Eagles by double-figures, and they have won the last three home games against their northernmost rivals.

The game started in typically tight fashion, although back-to-back Yanders baskets put the Rocks 8-4 up and he hit a three-pointer soon afterwards for a 15-7 lead. However, that was as good as it got for the Rocks in the early stages as the visitors responded with a 12-3 burst, which included 7 straight points from Lynard Stewart that gave his team an 18-19 lead. Reggie Jackson connected from long-range, before Blake Shelton’s basket with 12 seconds remaining made it a one-point game at 22-23 after the opening ten minutes. Yanders and Stewart – former team- mates and league, Playoff, and Cup winners at the Sheffield Sharks – dominated the first quarter as the former had 10 points and the latter 14.

The Rocks turned the game around in a second stanza that saw nine lead changes. They immediately went ahead when Gareth Murray opened the period with a three-pointer. Jackson made consecutive baskets to give the Eagles a 25-29 edge before another Murray triple sparked a 7-2 run for the hosts, which Scotland’s international captain also capped, for a 32-31 lead. Another lead change ensued, before the Rocks closed the half with a 9-2 tear, all of which were scored by Shelton, for a 45-41 advantage.

The lead was maintained in the third stanza, which included two major runs. The Rocks’ lead peaked at 61-50 after another 9-2 push. However, the Eagles scored six points in the last minute, and when Moore made a lay-up on the buzzer they had narrowed the deficit to 61-56.

The Rocks stayed strong in the fourth period as Murray once more hit an early triple. The game was settled as they hit three consecutive three-pointers – from Murray, Yanders, and Marc Pratt – in just over a minute for a 79-61 lead. With a little over three minutes remaining, the Eagles could get no closer than the final score as they suffered their second defeat of the season.