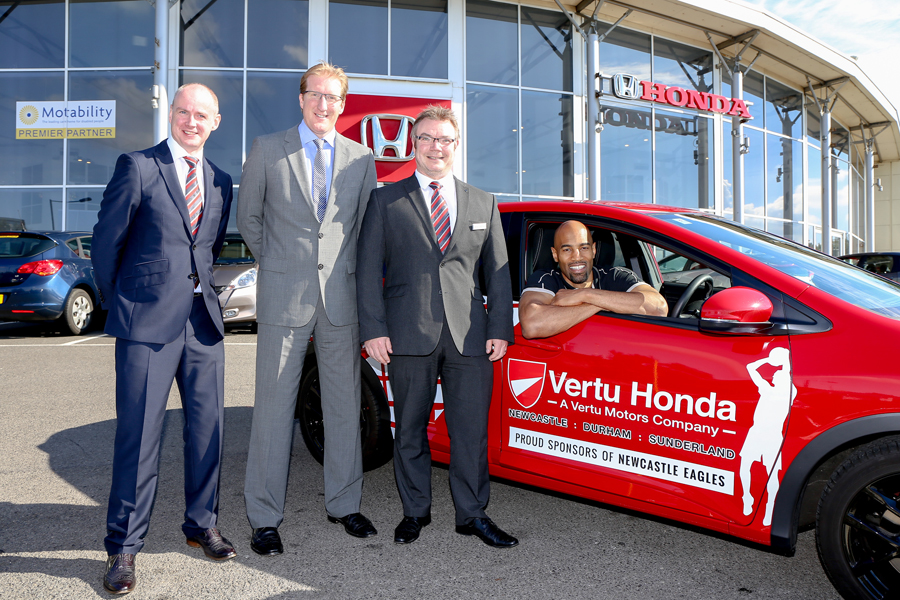 Vertu Honda Keep Eagles On The Road To Success

The Esh Group Newcastle Eagles are based at Northumbria University and currently play in the British Basketball League. Considered the most successful team in the league’s history, last season the Eagles completed their third ‘clean sweep’ under player-coach Fabulous Flournoy, winning the BBL Championship, BBL Championship Play Offs, BBL Trophy and BBL Cup.

The support comes at an important time for the Eagles as they prepare and plan for the season ahead as they look to stay at the top of the game and prepare to host the inaugural MKM Euro Invitational, which will see a number of European teams take on the best from the British league.

The team took delivery of the brand new Honda Civics from Vertu Honda Newcastle’s general manager, Richie Carrigan, who said: “We are always pleased to show our support for the local community. The new and efficient Honda vehicles we are supplying will help to make sure the team can get to training sessions and games more easily and can continue to deliver game-winning performances.

“The Eagles are such a dominant force within British basketball, as demonstrated by their performance last season and we’re proud to be able to support the most successful sports team in the North East.

“We wish them all the best for this coming season.”

Paul Blake, managing director for the Newcastle Eagles, said: “We are very pleased to be working with Vertu Honda again this season. The team at Vertu are very passionate about looking after the local community and sport, which fits perfectly with our own values as an organisation.

“We’d like to thank Vertu Honda for their continued support. The vehicles they provided last season have been excellent and the fact that all of our players were able to get around easily definitely contributed towards our clean sweep.”