Eagles Dominate Team Of The Week 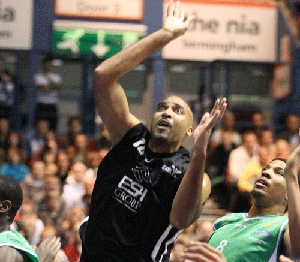 It was a great weekend for the Newcastle Eagles with plenty of great performances so it is no surprise that there three Eagles in the BBL Team of the Week.

Paul Gause (Newcastle Eagles)
It’s been a stop-start season for BBL rookie Paul Gaus who has had some injury issues but the playmaker showed just why Fab Flournoy has so much faith and trust in him with a vibrant performance in the BBL Cup Final. His intensity on defence and quickness offensively caused plenty of problems for UCP Marjon Plymouth Raiders as he produced a magnificent cameo for his team behind the headline act Charles Smith. Gause was in the thick of the action and came off the bench to pour in 24 points, dish up three assists and claim two steals. This was the second appearance for Gause in our starting five in as many weeks and his third of the season.

Andrew Bridge (Newcastle Eagles)
It’s not been one of his best seasons to date but Andrew Bridge has started 2012 with real gusto and the performance of the Eagles’ captain at the National Indoor Arena reminded everyone of his influence and capabilities. The message from Fab Flournoy will no doubt be one demanding Bridge continues in this vein of form for the rest of the season and grabs more BBL Team Of The Week appearances. Bridge was a brilliantly efficient 6 of 8 in the big game on his way to 16 points while also contributing four rebounds, three assists and three steals.

Sherrad Prezzie-Blue (Worcester Wolves)
The Wolves guard registers his fourth appearance of the season after another hugely impressive performance over the weekend when he pulled the strings to help his team climb joint-top of the BBL standings with a win over Durham Wildcats. He was a perfect three of three from downtown and in addition to 13 points, he produced five assists and four rebounds to complete a measured and efficient performance which saw him look after the ball with great composure. Prezzie-Blue also posted an excellent performance last Friday night in the road victory at Mersey Tigers.

Charles Smith (Newcastle Eagles)
It’s difficult to argue this wasn’t the biggest performance of any player so far this season due to not only the incredible numbers posted by Smith, but also because of the magnitude of his stage. The veteran showed why he is one of the most underrated players ever to have played in the BBL with a vintage 39 point MVP performance in the Cup Final as UCP Marjon Plymouth Raiders were left trailing in his wake. It was a truly special effort since he showed his full range of skills with some devastating perimeter shooting making five of his seven attempts from downtown, a couple of ‘and-1’ plays going inside and even coming up with the goods defensively with two huge blocks.

Richie Gordon (Worcester Wolves)
If you thought Charles Smith produced the best display of the weekend, then at least from a statistical and performance efficiency standpoint, you would be wrong. For Richie Gordon produced the best display of any BBL player this season against Durham Wildcats when he amassed a gigantic valuation of 44 after racking up a mammoth double-double of 30 points and 20 rebounds. Eight of those rebounds were offensive while Gordon also came up with three blocked shots to remind everyone why he was recently crowned Molten BBL Player Of The Month. This is the fourth appearance for Gordon in the last five weeks as he catapults himself just behind Ayron Hardy in the race to have the most appearances this season.