Newcastle Eagles/News/Eagles Do The Treble In 2009!! 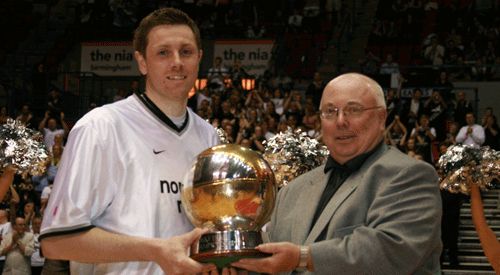 Trey Moore was named the Most Valuable Player (MVP) for his 22-point, 5-rebound haul for the victorious Eagles.

Eagles’ Head Coach Fab Flournoy commented after the game, “I’m proud of my team. It’s been another successful season for the Newcastle Eagles and we are happy to end on such a high, giving our fantastic fans the win they deserved for their great support.”

The teams traded baskets in the opening minute, before Eagles went on a 7-0 run to take an early 10-4 lead. Player of the Year Trey Moore was marking himself out as an early contender for the MVP award, with ten first quarter points, despite an unlikely miss from the free throw line. Another 7-0 burst put Eagles 17-6 to the good, with Moore once again dominant.

A string of four three-pointers followed, as the teams wowed the crowds. Reginald Jackson bagged four long-range baskets on his own as it was Eagles’ fans who had the most to cheer about as they went into the second quarter 36-17 ahead.

Everton Tigers rallied early in the second period, scoring 11 of the first 13 points to reduced the deficit to 10 points at 38-28 to Newcastle. The Tigers’ defence was much improved as they kept Eagles to just 15 points in the quarter. Richard Midgley stepped up and scored 10 personal points, but it was not enough to cut the gap down to single figures, as Newcastle led 51-40 at half-time.

Early in the third quarter Tigers cut the gap to single figures at 54-46, but Newcastle replied with six without reply to re-establish their double digit advantage. They led 60-46 and though the teams traded baskets for a few minutes, Eagles edged the final minutes to lead 70-52 by the end of the quarter.

Led by Richard Midgley, Tigers hit back strongly in final quarter. Midgley hit two three pointers in quick succession to cut the gap back down to 13 points at 77-64. Another Midgley long range basket – three of seven points in the run – helped Tigers on a 13-2 tear, which put them just four point adrift at 81-77.

What followed was the most exciting basketball of the weekend, as Tigers battled frantically to produce an incredibly comeback. With 16 seconds left Flournoy fouled out for Eagles. Midgley for Tigers and Moore for Eagles then netted twice each from the foul line, as Eagles led 86-82 with 15 seconds left. Midgley scored again with nine seconds left to bring the game back to within two points at 86-84. However, Everton were in the penalty and forced to foul to re-gain possession. Jackson netted one of his two foul shots to take the score to 87-84 and though Midgley attempted to level the scores with a long range shot, his attempt found empty space and the Eagles were victors.

It was a valiant attempt by Everton, led in no small part by Richard Midgley who scored a record-breaking 36 personal points. Olu Babalola added 25 for Everton, to no avail. As with the regular season, Eagles had snatched the silverware from Tigers, but Everton finish the season with their heads held high.