Eagles Come Back With Victory Over Tigers

Newcastle Eagles/News/Eagles Come Back With Victory Over Tigers 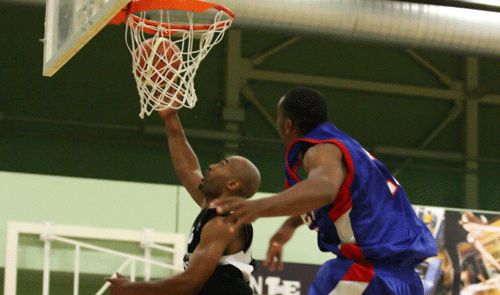 The Newcastle Eagles bounced back from their first defeat of the season by beating the Everton Tigers 98- 81 at the MetroRadio Arena. The game saw last season’s top two teams in the BBL Championship, and was a key early-season win for the Eagles.

Darius Defoe led the scoring for the hosts with 26 points and 9 rebounds, while Joe Chapman had 23 and Andrew Bridge scored 16. The Tigers were led by 20 points from Jerome Gumbs.

The Eagles were fast out of the blocks and didn’t look back. They raced into a 7-0 lead and led 19-11 after back-to-back triples from Bridge and Chapman; they each scored two three-pointers in the first quarter. Bridge had ten points in the opening stanza as the Eagles led 27-20 after ten minutes.

In the second quarter, the Eagles pushed the lead into double-figures at 36-26 on a pair of Reggie Jackson free-throws, but were pegged back as Gumbs and Flo Larkai combined for five straight points to narrow the gap to 44-39 with two minutes remaining. Chapman made the last two baskets of the half to send the Eagles into the locker room 50-41 in front.

Newcastle’s big run came in the fourth quarter as Defoe scored 12 straight points for his team, before Chapman hit another two three-pointers and a field goal, to take them into a 77-57 lead.

The Tigers couldn’t get to within ten points in the fourth quarter, as they were condemned to their third defeat of the season. The Eagles remain in second place, just one win behind the Sheffield Sharks and with a game in hand.