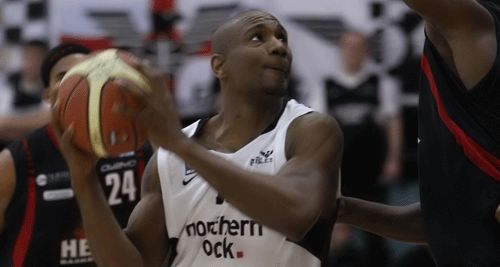 The BBL Championship Table now looks a lot tighter at the top, with the Newcastle Eagles just two points behind league leaders the Sheffield Sharks, whilst the Guildford Heat sit on the edge of the play off places in joint eighth position with the Worthing Thunder.

The Eagles visited the Heat tonight, and the scores were neck and neck from the opening tip, until baskets from Mike Martin and Julius Joseph gave the Heat a 13-8 lead with 6:21 left in the period. They then split another four points between them to take the home side’s advantage out to 17-8, with five points from Kenny Langhorne then putting the Heat ahead 22-18. For the next two minutes however, the Eagles, who looked to be in trouble, made a commendable charge, outscoring the home side 8-2 until with under a minute to go in the first, a field goal from Joseph and two free throws from Tayo Ogedengbe put the Heat up at a comfortable 28-18.

The second period was to be a completely different story, as it finished 46-45 in the Heat’s favour, but they did go as many as 14 points ahead, 40-24 with 8:07 remaining. The Eagles outscored Chad McKnight’s men 11-6 for the rest of the period to keep in touch at the half by a single point.

With the third period finishing 63-62 to the Heat, there was everything to play for in the final ten minutes, which was nip and tuck throughout. The turning point in the game for the Eagles particularly, was the score lines being level at 72-72 with four minutes to go, only for the Tyneside outfit to go on a 10-3 burst, despite missing four free throws. This proved to seal the game for the Eagles, leaving player-coach Fabulous Flournoy a satisfied man: ‘We played a good game but struggled in the first quarter’ he said: ‘The Heat played very well, with a lot of energy, and they beat us last time we were here in a very similar game’ he added: ‘We needed to pick up our defence in the second half which we did. We cleaned up on the boards – Lynard (Stewart), Charles (Smith) and Darius (Defoe) all got lots of offensive rebounds. It was a case of matching their energy rather than doing anything different.’