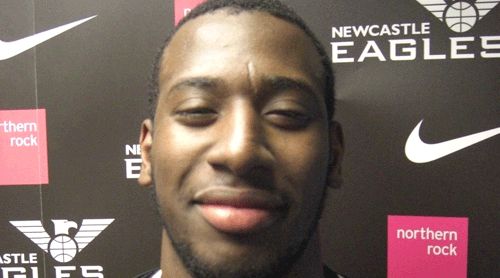 NEWCASTLE Eagles kept their momentum going at the top of the BBL Championship with a clinical demolition of bottom-of-the-table Birmingham. Although this was a game Fab Flournoy’s men were expected to win, the message to the rest of the league is that the Eagles went about business in the right way.

The game was played in Telford as cash-stricken Birmingham look to expand their fan base and consolidate their place in the BBL. Quite how they can do that after a performance like this is anybody’s guess but that’s of no concern to Newcastle, who stay focused on their quest for silverware.

There was confusion at the end of the game as the official scoresheet showed the score as 104-59, while the sheet produced by the statistician had it 102-69! However, no matter what score is finally submitted it is two more points in the Championship bag for Newcastle.

Flournoy had granted Will Spragg time off to play for his local club and Aaron Nielson was also missing as he was on duty for injury-hit Team Northumbria. With Sam Attah still not fit, it was a very experienced Eagles line-up that started. Jeremy Hyatt was also not risked as he continues his comeback from injury.

The Eagles then lost Olu Babalola early in the first quarter with an ankle injury and, although it was not serious, the way the game went he was not risked further and sat out the remainder of the contest. The Eagles ran with a seven-man rotation throughout and they all contributed greatly to the win with six of them reaching double figure scores.

The only Eagles player, other than Babalola, not in double figures was Flournoy, who concentrated on orchestrating his team’s efforts on and off the court. In-form Charles Smith led the way with 23 points, nine rebounds and six assists, while Lynard Stewart had a ‘double double’ of 18 points and 11 rebounds.

Young forward Darius Defoe had 19 points and eight rebounds, while newcomer Steve Leven continued his fine start to his Eagles career with 19 points.

The game was effectively over by half time as the Panthers, without play-maker Rob Paternostro, struggled to maintain pace with the Eagles’ fierce start. It was 23-10 after the first quarter and 50-19 at the half as the Eagles stifling defence and consistent scoring were brought to the fore.

Even though Birmingham managed 40 points in the second half, the Eagles didn’t ease off on offence and replied with 54 of their own to win all four quarters and make the final score, on the official sheet, 104-59.

The Eagles move four points clear at the top of the BBL but they are aware sterner tests lie ahead, starting with the visit to the Metro Radio Arena this Friday of BBL newcomers Everton, who are pushing hard for a top-four spot and have ex-Eagle Richard Midgley in their squad.