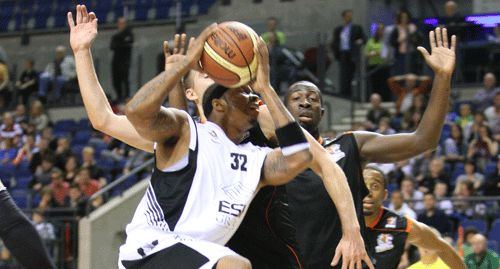 The Newcastle Eagles made it nine league wins in a row, as they went through the century mark for the fourth time in five games in beating the Prestige Homes MK Lions 91-100. The Eagles used another strong first half performance, as they were through the half century mark by half time for the sixth game succession.

Despite the score, it was a tight opening as there were six early lead changes early on, until Moore and Chapman made it 8-13. Soon after, Moore scored 3/3 from the line and Chapman followed with a triple, to make the score 14-19. The Lions narrowed it to a one possession game at 20-22 by the end of the quarter, but Chapman’s 11 in the opening ten minutes and Moore’s 7 gave the Eagles the edge.

Smith took over in the second stanza with back-to-back baskets and within two and a half minutes the Eagles had pushed it out to double-digits at 24-34. Smith scored another five in a row, taking his personal tally to 17 in the opening 15 minutes, for a 28-41 lead, before Moore and Chapman took over again towards the end of the period: the former hit a three and the latter’s basket made it 37-53 inside the final minute.

Eagles scored the first five of the third quarter, only for the Lions to respond with six straight for a score of 47-58. The Lions couldn’t narrow the deficit any further until Shawn Myers’s triple with a minute to play in the period made the score 62-72 and two late Kris Clark free-throws made it 64-72 to set up an exciting fourth quarter.

Moore scored five quick points in the fourth to preserve Newcastle’s double-figure lead and the Eagles pushed on with Smith’s triple and a Chapman score pushing it through the twenty-point mark at 68-89, as the Lions scored just four points in the opening five minutes. That was enough for the Eagles to see the game out, despite their hosts making one last push as a 7-0 surge made the score 75-89 and they had it down to 7 points at 91-98 within the final minute.