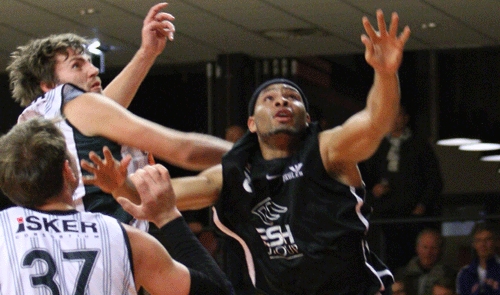 With 5.5 seconds to go, the Eagles were heading out of the Basketball Days Tournament in Zwolle, Holland and then they came up with two huge plays to seal the seven-point victory they needed to send them in to the semi-final.

The Eagles were ahead by five when Andy Thomson missed a free-throw but as Nigeria tried to breakaway, Paul Gause took a charge on the halfway line that stopped the clock and enabled Fab Flournoy to call a time-out.

Newcastle had one last chance and took it magnificently. The ball reached Thomson in the corner and he spotted Darius Defoe’s cut to the basket and found him with the perfect pass as the clock ticked to 1.5 seconds, the Eagles power forward laid in the bucket that confirmed his side’s place in the semi-final.
The result meant that all three teams in Newcastle’s group had one win apiece but by virtue of a better points difference than Barsy Atyrau they went through but it couldn’t have been closer as Eagles’ was -2 with Barsy’s -3!

Finishing second in the group means the Eagles will play host club Landstede Zwolle whilst the other final four game see’s Nigeria play Gremio Mogi of Brazil who lost to Zwolle prior to the Eagles game.
The game itself was a tough physical basketball game where neither side gave an inch and battled hard throughout the full 40 minutes. The Nigerians got off to the better start but Eagles courtesy of Thomson and Defoe pulled it back and were only down 22 – 21 after the first.

In the second, Eagles trademark defence kicked in and with Charles Smith getting in to his stride and good contributions from Paul Gause and Andrew Bridge they gradually asserted their authority. Transition defence and fast break offence gave them a 47 – 30 lead as the clock ticked down.
Then AdeolaDagunduro hit a crazy triple from virtually his own bench on the buzzer to send the sides in to the locker room with the Eagles leading 47 – 33.

That would have been enough to have taken the Eagles through and in truth Fab Flournoy would have taken that right there as he himself had been unable to suit up and play owing to a slight groin strain and then he lost Joe Chapman for the whole of the second half with a pulled muscle.

Inevitably the Eagles thin roster and unfamiliar rotations allowed Nigeria to come storming back and with ten minutes to go Newcastle only led 66 – 60 which suddenly was not good enough to send them through. Worse was to come as Nigeria twice closed to within one point in the final stanza.

But the Eagles didn’t panic and with Nigeria in foul trouble, Thomson made the free-throws that were required to set-up that incredible last five seconds.