Eagles Back To Winning Ways

Newcastle Eagles/News/Eagles Back To Winning Ways 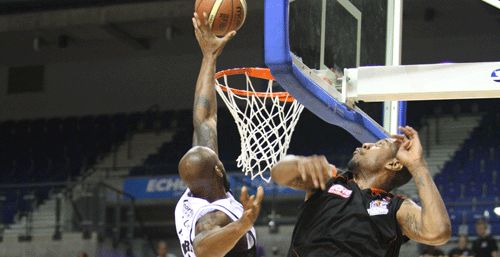 The Newcastle Eagles bounced back from last week’s defeat against title rivals Mersey Tigers to win their fifth game in six outings by beating the Prestige Homes MK Lions 99-82. For the Lions, they have slumped to ten defeats in their last eleven games.

The backcourt pairing of Trey Moore, with 23 points, and Reggie Jackson, who had 19 points and 7 assists, led the Eagles, while Kadiri Richard had a double-double of 12 points and 14 rebounds.

The Eagles led from the outset and were soon 9-2 up after a Jackson triple and consecutive Darius Defore baskets, and it became 13-4 after four more Jackson points. Bolds brought the Lions back into it and his three-pointer made it a one possession game at 18-15 with two minutes to play in the period, but the Eagles maintained a 25-19 edge.

They quickly restored their double-digit advantage early in the second stanza, and it was 36-22 as Jackson made another three-pointer, and 40-22 when his backcourt partner Moore scored consecutive baskets, becoming a 15-3 start to the period. The lead went through the twenty mark, before Bolds brought the Lions back once more as he scored 6 in an 8-2 burst just before the half, making the score 53-37. Reggie Jackson was on 11 points and 5 assists as they headed in for the half time break, while Kadriri Richard had 10 points and 11 rebounds.

The Eagles had an early 6-2 run in the third quarter and it was 62-43 on Moore’s three-pointer. But a 7-2 run, including five for Kris Clark, helped keep the Lions in touch and they pulled it back to 67-56 with two minutes to play in the third quarter. And it was Bolds again that kept them within striking distance heading into the fourth as his basket narrowed the deficit to single digits at 70-62.

But Bolds turned from hero to villain for the visitors as he was called for a technical foul early in the fourth. The Lions were punished for that as Moore made two free-throws and Bridge scored from the ensuing possession, pushing the lead back out to 74-62. The Eagles decided the game with a 7-0 burst, including another five for Smith, to lead 83-68 with 6.40 remaining, and the Lions didn’t manage to get within single-digits for the remainder of the game.