Eagles Back To Winning Ways In Front Of Packed House 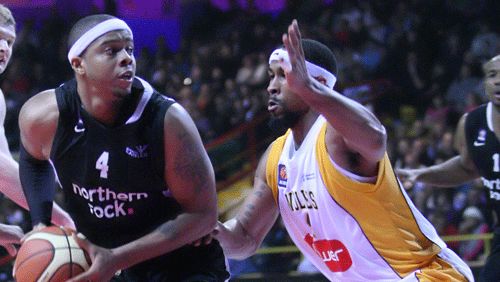 The Newcastle Eagles remain within striking distance of the Sheffield Sharks at the top of the table after a 92- 71 defeat of in-form Worcester Wolves in the North East, in front of just under 4,000 Eagles fans.

Joe Chapman inspired the Eagles with 31 points, while Lynard Stewart had 14 points, 10 rebounds and 7 assists.

The teams could barely be separated in the first half of the game. There were eight lead changes in a first period that ended with the teams knotted at 23. It was a slightly different picture in the second stanza as the Wolves led throughout, but rarely by more than one shot. But the momentum swung in favour of the Eagles as halftime approached and Chapman connected on a buzzer-beating three-pointer to put them into the ascendancy at 40-39 at the half.

That momentum continued as Chapman hit another three, followed by a Stewart basket, to make the score 53-47 in the third, and it reached 61-54 on another Chapman triple before neither team scored in the final minute.

The Eagles were rampant in the fourth quarter as they put 31 points on the board. Chapman and Smith kicked it off with an 11-3 opening in which the latter scored two triples and the former added another. That was followed by a 6-0 run, before the lead peaked at 90-67 on Aaron Nielsen’s three-pointer.