Eagles Back On Track With Win At Riders

Newcastle Eagles/News/Eagles Back On Track With Win At Riders 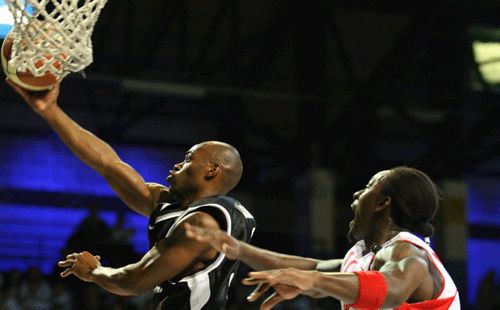 The Newcastle Eagles moved up to second in the BBL Championship table as they beat the Jelson Homes DMU Leicester Riders by 81-108 at the John Sandford Centre.

On this night, it was Lynard Stewart that led the scoring with 20 points, after shooting 9/12, and he was supported by 19 from Reggie Jackson and 18 from Trey Moore. Bradd Wierzbicki led the Riders once more with 19 points.

The early exchanges provided no clues for what was to come as the Riders raced into a 14-4 lead behind 6 points from LaTaryl Williams. However, the Eagles came straight back as Stewart made 6 of his own and they tied the game at 16-16, but the Riders still led 23-22 after the first ten minutes.

The Eagles found their range in the second period and netted six out of seven three-pointers on their way to taking a 43-51 half time lead. A 30-30 tie was broken as Moore, Jackson, and Fab Flournoy hit triples on consecutive plays for a 36-42 lead. Moore then added another three with the final possession of the quarter.

The Riders kept the game close in the third quarter as, with 2:30 remaining, a Matt Martin three-pointer made the score 60-69. However, the Eagles closed the period with the last 8 points to lead 60-77 going into the decisive stanza.

The hosts would not get close as Newcastle’s lead peaked at 78-105 after Phil Missere fouled out of the game and his protestations led to a series of technical fouls that meant the Eagles spent most of the latter stages on the free-throw line.