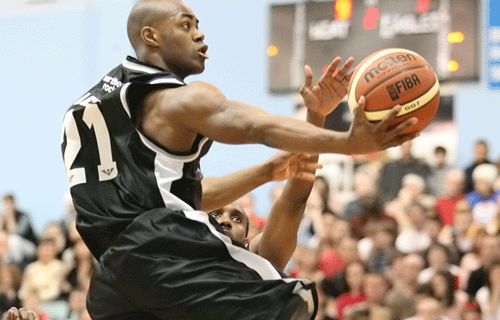 Newcastle Eagles are the 2009 BBL Trophy winners after beating Guildford Heat 83-71 at The Spectrum in Guildford. Trey Moore was named Most Valuable Player after his 28 point effort led the Eagles to their third Trophy triumph.

The Eagles produced a superb 23-12 third quarter to wipe off a three point half time deficit and give themselves enough of a cushion to be able to keep the Heat at bay.

Moore’s two free throws just over a minute into the match opened the scoring and a Tap Toney bucket more than 60 seconds later put the Eagles 4-0 up until Keonta Howell, who ended the match as top scorer on 30, put Heat on the board.

Howell’s basket started a 12-2 run for Guildford, which saw them hold a six point lead at 12-6. Three times Eagles trimmed the gap back to four with Heat pushing back out to six – the last time being 18-12.

Five points from Eagles’ Darius Defoe were replied to by just a Howell free throw to cut the gap to 19-17 before an EJ Harrison layup made it 21-17 at the end of the first quarter. Heat were hampered throughout the opening quarter with a facial injury to EJ Harrison, which saw the guard miss four minutes of action.

Moore began the second period the way he began the first with two free throws as the Eagles worked hard to keep within one shot. A Moore basket midway through the quarter made it 29-27 but it was the catalyst for an 8-3 Heat burst, capped off by a Howell three to take them out to 37-30.

Eagles gradually whittled away at the seven point gap and reduced it to just two again courtesy of a 7-2 run with three points from Reggie Jackson and two apiece from captain Andrew Bridge (17 points, eight boards) and Moore.

Heat talisman Michael Martin (12 points, 10 boards) rounded off the first half scoring with a free throw following a Charles Smith foul to make it 42-39.

The match turned early in the third quarter. After Martin had put Heat 44-39 up Eagles’ Toney and Bridge combined for an 8-0 run to give their team a 47-44 lead. Martin then picked up his fourth foul with 7.52 left and by the time he returned with 2.52 on the clock the game had a different look.

A Howell two had trimmed the margin back to one, but it only sparked a 12-1 burst by Newcastle to put them well in control at 59-47. Moore hit six in the run and was supported by four from Defoe and two from Jackson.

Heat, through Kabir Abu, battled back with a 7-3 close to the quarter as they trailed 62-54 heading into the final stanza.

Jackson quickly gave the Eagles a double-digit lead again with the first four points of the fourth quarter. However, it sparked a good response from Heat as an 8-0 run, including threes from Daniel Sandell and Howell brought it back to 66-62.

The teams swapped baskets to 70-66 before Eagles gradually began to close the match out. A three point play by Bridge made it 73-66 and from there Trey Moore took over with eight free throws to prevent Guildford from getting any closer than six points on two occasions.

Jackson iced the win with a layup inside the final ten seconds to end with 13 points and seven assists.