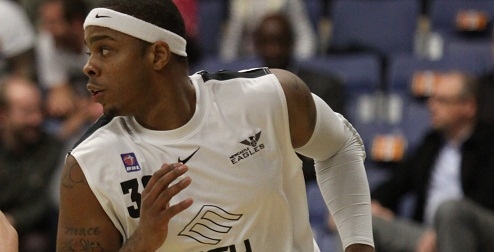 Defending BBL Cup champions Newcastle Eagles reached the semi-finals of this year’s competition with a dominant 107-85 victory over Worcester Wolves in a game that saw some excellent 3-point shooting from Eagles.

After a tight opening, Joe Chapman scored three three-pointers off three possessions, sparking a 22-7 run that would leave the Eagles up 39-23. The Eagles continued to extend their lead, making it 62-38 at the half with the Eagles having made 11 of their 15 attempts from long range.

The Eagles continued to be the better side following the break, outscoring the Wolves 22-10 in the third quarter and going on a 20-5 run that gave them their largest lead of the game at 88-49 early in the 4th stanza.

In the fourth, Wolves managed to cut into the Eagles lead but the earlier Eagles dominance had made the lead unassailable and they ran out 107-85 winners.

The Eagles will learn who they face over two legs in their BBL Cup semi-final tomorrow when the team they beat in last season’s final, UCP Marjon Plymouth Raiders travel to Surrey Heat.