Eagles Academy Successes Down The Stretch 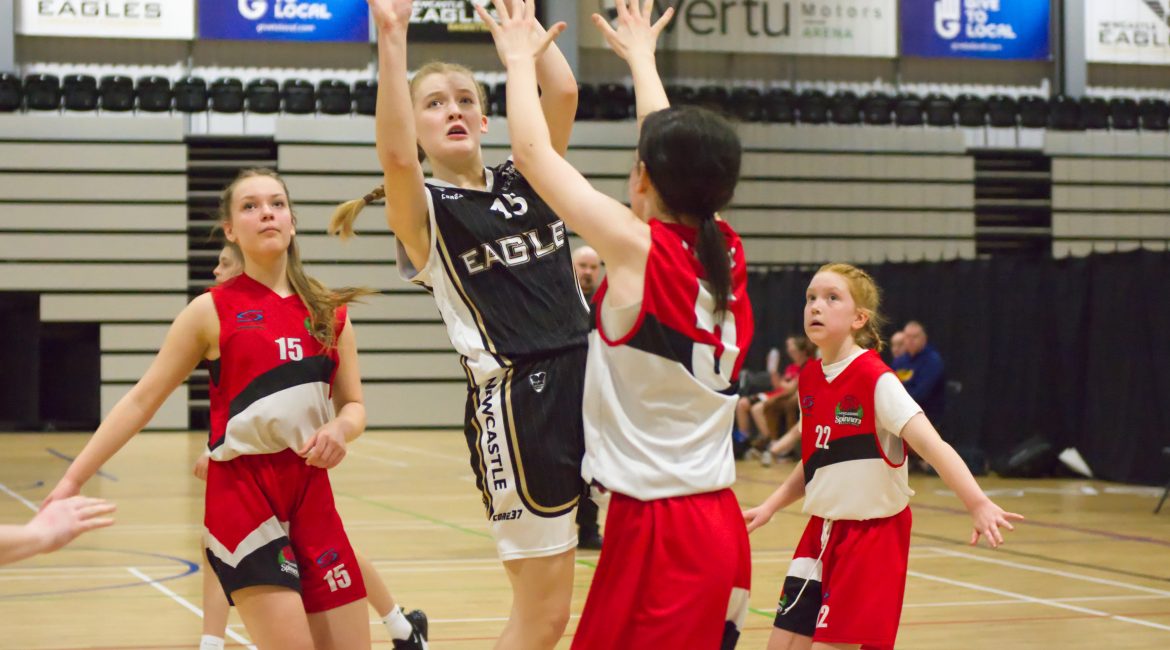 Newcastle Eagles Under 14 Girls set the seal on a superb homecourt season with a fabulous 52-point win against Lancashire Spinners.

The hosts tore into their rivals from the tip and a series of fast-breaks underpinned a 12-point lead at the end of the opening period.

Things unravelled for the Spinners after the restart as the short-handed visitors found Newcastle too hot to handle.

In a bid to limit the damage, the visitors emerged for the second half with an extreme zone defence in the paint.

And Chloe Laws started to grow into the game as her impressive ball handling contributed to a 40-point Eagles lead with 10 minutes to play.

Two Spinners star fouled out down the stretch and ruthless Newcastle closed out an 87-35 victory in style.

Walton (25), O’Neill (17) and Grace Rae (16) led the Eagles scorers as the hosts closed out their final regular season home game in confident mood.

George Stephenson dropped a massive 39 points on dumbstruck Derby as Newcastle Eagles Under 16 Boys wrapped up the regular season in style.

Calvin George took a depleted roster down the M1 and the visitors trailed 10-2 after a shaky start.

But step forward Stephenson as the in-form guard rolled off five triples inside the third quarter to break the game wide open.

Newcastle secured third spot in the league on the back of a 94-74 win and head into the post-season full of confidence.

But Stephenson will be a marked man from beyond the arc in the playoffs following a career game on the road.

The Eagles struggled to shake off their bus legs early on as the hosts leapt into an eight-point lead.

But a smart timeout allowed the Tynesiders to regroup and coach George’s side had reduced the deficit to just two points heading into the second period.

From that point forward it was all Newcastle as the visitors dominated at both ends of the court.

And the short-handed Eagles had somehow turned an eight-point deficit into a 10-point lead at the half.

The hot hands of Stephenson scorched Derby after the break as a succession of shots found the target from way downtown.

And Newcastle’s MVP continued to dominate down the stretch — scoring inside and out before breaking the double team with a series of neat assists.

Stephenson’s eight three-pointers proved too much for stunned Derby and a 20-point win was all the energetic Eagles deserved.

Attention turns to the post-season party as Chloe Gaynor’s fast-improving Newcastle Eagles Under 14 Boys bid to make their presence felt in the playoffs.

A blowout defeat to star-studded Manchester Magic shouldn’t detract from an impressive regular season for the boys in black.

And after a tough trip to the North West, Newcastle have two weeks to prepare for their playoff date with destiny.

Magic took an impressive 10-1 record into their final home game of the regular season.

But the Eagles played a full part in a frantic first quarter as two attacking teams traded baskets.

An Aston Hall and-one got the visitors going before Jakub Bobkowski and Leo Degnan Potter put their own stamp on the stat sheet.

A 13-0 Magic run stopped Newcastle in their tracks but Hall, Ben Lumley and Degnan Potter inspired a strong fightback as the clock ticked down on an entertaining first quarter.

The Eagles trailed by 11 points heading into the second period and Manchester extended their lead from the restart.

Lumley and Joseph Osarenkhoe made it count from the bonus stripe before Luke Tucker turned defence into attack with an assist for George Merrifield.

But Magic kept coming back with a series of smart offensive plays and the relentless hosts opened up a 34-point lead at the half.

Merrifield and Hall kept the scoreboard ticking over after the break as Newcastle stayed focused on the free throw line.

Strong defence from Degnan Potter kept Manchester keen but the Eagles faced a mountain to climb with 10 minutes remaining.

Magic restricted Newcastle to just seven fourth period points as the hosts soared past the century mark to complete a 108-49 win.

But the playoffs represent an outstanding opportunity for Gaynor’s gritty roster to close out the 2021/22 season in style.