Eagles Academy Soar Down The Stretch 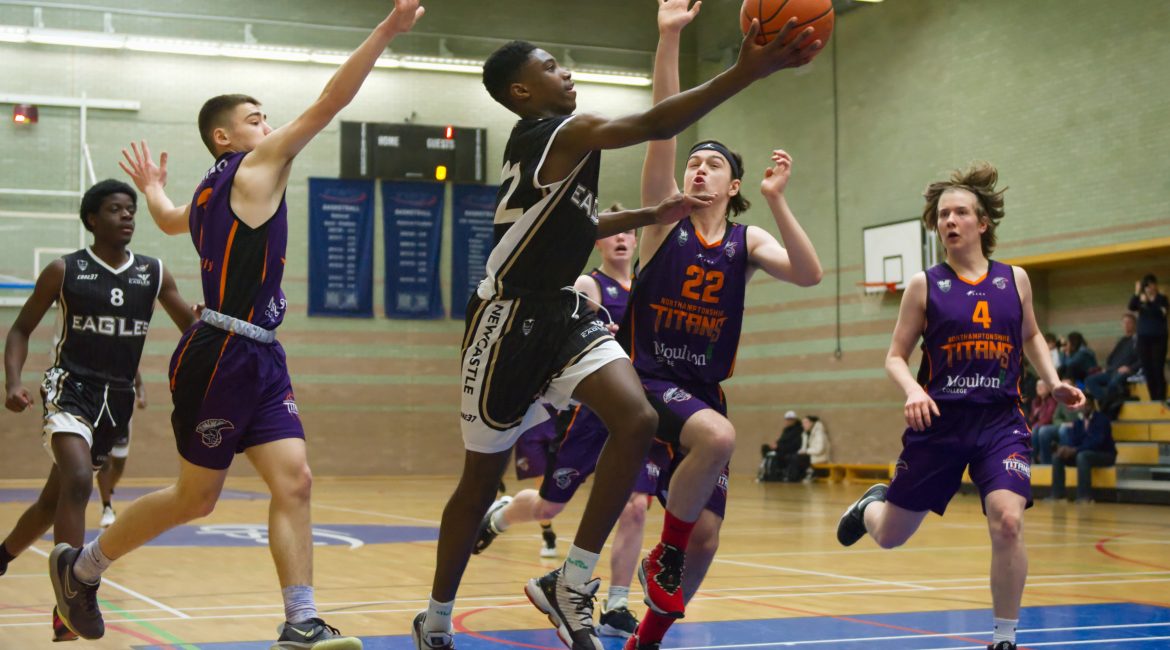 The longest road trip of the season didn’t faze Newcastle’s Under 16 boys as the Eagles returned from Northampton with two deserved points.

The homecourt Titans had no answer to their free-scoring rivals as the visitors won every quarter.

And Newcastle never looked in danger of slipping up as the Eagles eased towards an impressive 89-63 victory.

A stunning start ensured Calvin George’s side led from tip to buzzer and Northampton had no answer to a 12-0 tear from the tip.

Emmanuel Hezekiel, Pedro Omere and Farrell Kepngang did the early damage before Tobi Dawson made his presence felt at the offensive end.

And the Titans were faced with a mountain to climb as Newcastle took a 21-12 lead into the second quarter.

The home side hit back after the restart to eat into the Eagles’ advantage.

But Ollie Finlay and George Stephenson combined well to steady the ship and underpin a 44-31 lead at the half.

Young gun Jesse Osarenkhoe aced two triples from the corner during a lightning-fast start to the third quarter.

And Dawson and Joe Corkin ensured Newcastle made their possession count as Northampton sought a way back into the game.

Osarenkhoe and Stephenson set the seal on another dominant quarter with a brace of athletic blocks and the Eagles led by 22 points with 10 minutes on the clock.

Dawson turned on the style to complete an eye-catching Euro step score before the visitors closed out a convincing win down the stretch.

Newcastle Eagles wrap up the regular season at league leaders Manchester Magic this weekend with playoff glory in their sights.

And Newcastle visit the Magic on Sunday in a top of the table clash bound to set pulses racing ahead of what promises to be a thrilling post-season.

It was Joseph Osarenkhoe who opened the scoring against the Rockets as the home side raced into a first quarter lead.

Jakub Bobkowski and George Merrifield made their presence felt at the offensive end before Ben Lumley bagged the first of several eye-catching buckets.

And as Birmingham slipped into early foul trouble, the hosts used Luke Tucker’s uncompromising defence as the platform to build a deserved 17-9 lead.

It was same again in the second quarter as Tucker and the returning Leo Degnan Potter denied the visitors the time and space needed to mount a sustained comeback.

Lumley and Danny Ward kept the scoreboard ticking over at the other end before Aston Hall and Ashton Williamson found their way to the basket.

Newcastle led 34-18 at the half and that advantage swiftly stretched out to 22 points on the back of some superb shot selection and cool finishing under pressure.

Gaynor called a time out as the hosts’ pace began to slacken and her players responded in style with Merrifield, Bobkowski and Lumley doubling down on offence.

The Eagles took an unassailable 62-33 lead into the fourth quarter and with eight minutes on the clock the hosts found themselves 31 points in front.

Ward, Bobkowski and Lumley continued to run riot at the offensive end before Tom Beall and Tucker joined the scoring party.

Newcastle Eagles Under 14 girls were on target at Derbyshire Arrows as the in-form Tynesiders bagged a battling 11-point win on the road.

With a top four finish secured, attention is already turning towards the North playoffs.

And another regular season win against Lancashire Spinners this weekend would all but secure third place ahead of the post-season party.

Katy Lawson got the ball rolling against the Arrows with her first points of the season but a free-flowing clash was tied at 6-6 midway through the opening quarter.

A 10-2 Newcastle tear saw the visitors open up a 16-8 lead heading into period two and the Eagles extended their lead to 15 points on the back of Grace Rae’s blistering offence.

But Derbyshire regrouped and a series of Arrows fast breaks reduced the deficit to five points at the half.

But the Eagles were struggling to box out under the defensive glass and the hosts clawed their way back into contention to trail 43-40 with 10 minutes to play.

A tense fourth quarter saw Derbyshire lead for the first time as a short-handed Newcastle appeared to tire.

The Arrows looked on course to claim a remarkable come-from-behind win before the Eagles found an extra gear down the stretch.

And the visitors regained control thanks to a late defensive masterclass, holding the Arrows scoreless for the last four minutes to claim a hard fought 62-51 victory.