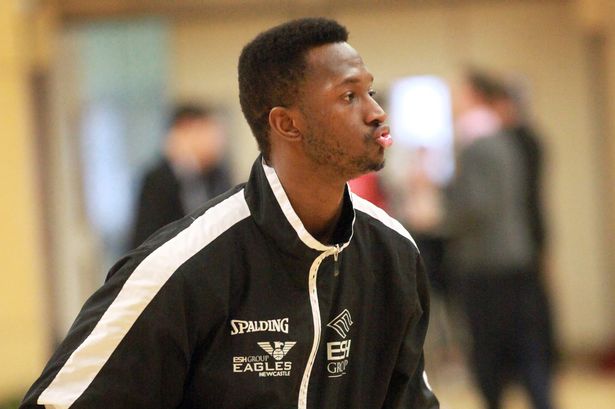 Veteran guard Drew Lasker is the latest player to be welcomed back to Esh Group Eagles Newcastle for the 2016/17 season. The extremely popular Texan returns for his fourth consecutive season to bring his energy, commitment and spark once again to the Eagles roster.

Very much a player that can be relied upon to give 100% in whatever role he’s asked to play the guard averaged 7.7 points, 3.9 rebounds and 1.9 assists per game last season scoring in double figures on 11 occasions as he netted 20 minutes per game.

Entering his 12th BBL season the 33-year old has played over 370 games in British basketball’s top-flight starting as a leading scorer from his Plymouth Raiders days to becoming the sort of role and back-up player every team would love to have on their books.

A measure of Lasker’s standing and effort at Newcastle saw him pick-up last season’s Most Improved Player of the Year Award as his vitality and bounce from the bench often was the catalyst of an Eagles win. None more so than in last season’s BBL Cup Final against Leicester Riders.

With The Eagles trailing, Lasker’s introduction to the game and eventual 14 points, 5 rebounds and 3 assists helped the Tyneside Club turn the game around and whilst he didn’t receive the MVP award for his efforts, many pundits and fans felt his contribution was what turned the game in The Eagles favour.
Lasker who is due to become a father for the first time later in the year is delighted to once again be part of The Eagles Roster.

“Even as a 12 year professional I’m definitely excited to be returning to The Eagles for my fourth season.. I’m just thankful to be here. I’ve seen a lot of players come and go so to still be lacing them up after all these years I’m blessed.”

“How times change, when I first came over I was the youngest for the first couple of years and now I’m one of the oldest on the team. I’m embracing the challenge to being able to lead the young guys and pass down the things I’ve learned over the last 12 years.”

“I’m excited for this season. We’ve got some fresh blood, some younger guys with vigour who are going to bring some excitement to the fans and also re-ignite the older veterans on the team. I think they’re going to fit in very well.”

“It’s going to be a different kind of style we’re going to play with than the last couple of years. The BBL is an up and down league. Last year if anything we lacked a little bit of pace but I think we’ve nipped that in the bud this off-season.”

For The Eagles and Head Coach Fab Flournoy the signing of Drew Lasker is seen as another vital piece of the jigsaw fitted in to the puzzle as they aim for further glory this season and one that was never in doubt as Flournoy explains.

“Drew is a critical component to our future success. We committed to him at the end of last season and there was never any question of us looking for any other player for that spot. His experience and athleticism will be big factors for us in the year ahead.”

Lasker will take his place in the roster for the MKM Euro Invitational Tournament when The Eagles entertain European powerhouses Telenet Oostende, Bakken Bears and Tartu Rock in a thrilling two days of basketball at Northumbria University Sport Central on September 4th and 5th.