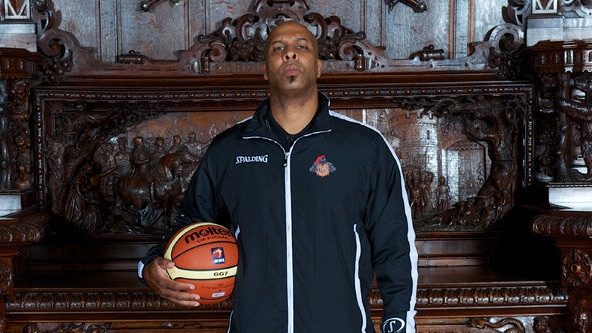 Our switch to the new Eagles Community Arena in November will be ‘massive for basketball in the region’.

That’s the verdict of original Eagle Paul ‘Dougie’ Douglas with the Birmingham-based coach keeping a close eye on his former club’s landmark move.

BBL stalwart Douglas played for the Eagles in the 1990s – a decade that stands out as a massive transitional period in the history of the North East’s only BBL franchise.

During the former guard’s time with the club a controversial move from Wearside to Tyneside saw the Comets – later rebranded as the Eagles – base themselves at what is now the Metro Radio Arena.

And Douglas said: “It was incredible moving to the arena back then.

“As a player you go from playing in sports halls and leisure centres to massive arenas and it felt like we’d made it in a way.

“At that stage of my career I was thinking ‘this is big, this is like an NBA game’. It was massive – at that time you’d not seen anything like that.

“It sounds silly but just even coming through the VIP entrance was special. When you went to a leisure centre you just went through the front door!

“The way that the basketball scene was shaping up back then it finally felt like we were making that jump to be on par with the European game.

“It wasn’t anything like Europe money-wise but we made that initial step by playing in arenas and bringing more people to our games.”

The Eagles have called Northumbria University’s Sport Central their home for the last eight years.

But the franchise will move into its third Newcastle base this winter with the opening of the Eagles Community Arena.

“Having your own home and being able to say ‘this is our venue’ is massive,” added Douglas.

“I’ve seen Paul come from when he first started working for Newcastle Eagles to where he’s got it now. It’s been no mean feat.

“To be able to see a dream like that come true – and be one of the few clubs in the BBL to have its own facility – is huge.

“And it’s a big step forward in terms of attracting youth to the franchise.”

Douglas coaches and mentors Birmingham’s emerging players through his All City Basketball programme and in his role as head of basketball at Aston Manor Academy.

And the veteran coach is confident the club’s new home will inspire the next generation of North East hoops hopefuls to make their mark in the region.

“In my experience if you have a very successful BBL team in the area that kids see from a young age they’ll aspire to be on that team.

“If the support and the facilities are there to back that up then even better.

“From my point of view eventually getting to play for Birmingham Bullets as a rookie was a dream for me.

“Birmingham were my city’s team and therefore they were my team – I don’t feel that’s changed too much really.”