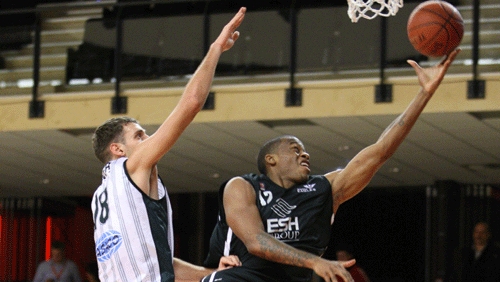 The last thing the Eagles needed going in to this game was another injury but that’s what they had as Joe Chapman’s knock from 24 hours earlier meant although he was suited up it was only in the case of an emergency. He joined Fab Flournoy on the sidelines unable to play.

And in the end it made a difference as Newcastle’s eight man rotation which included rookies Ross Wilson, Lamar Morrison and Joel Madourie could not match the firepower of the Dutch’s full and deep 12-man roster.

However, the aforementioned three rookies all gained valuable court-time against quality opposition in a competitive game and that can only stand them and the Eagles good in the longer run. The bulk of the Eagles scoring fell to Charles Smith, Paul Gause and Andy Thomson and they all did a great job despite this being their third game in as many days.

One of the bonuses that has come out of the Tournament for Flournoy and Newcastle along with the development of the younger inexperienced players is the return to the court of Gause who is looking sharper with every minute spent on court.

At the start of the game it was Zwolle’s Cameron Wells that was pulling the strings as the Eagles starting five struggled to find any energy and rhythm to match the Dutch enthusiasm. Amu Saaka and ex-Plymouth Raider Gerald Robinson were getting good looks at the basket and finishing well.

Newcastle found themselves 28 – 9 down after the first quarter and with a mountain to climb. But, Flournoy breeds tough sides and although legs and minds were tired they somehow dragged themselves back in to the game with a wonderful second period.

Gause took the game over and the injection of Wilson who had six quick points, Morrison and Madourie temporarily lifted the Eagles energy levels and back they stormed. Smith was scoring from all over, Gause was driving to the basket and Thomson was picking up vital pieces.

The comeback was magnificent and started with excellent defence turning to good offence and suddenly with a 35 – 17 ten minutes the Eagles went to the locker rooms down by a single point at 45 – 44.

Smith made the first bucket of the second half to take the Eagles in to a brief lead and the stage was set for a battle royal. Unfortunately Darius Defoe picked up two quick fouls and had to go to the bench. This slightly slowed his side down particularly on the glass where they were taking a pounding at both ends.

But, the Eagles managed to somehow stay in the game and as the fouth quarter started they were only down 70 – 67. However, Zwolle’s depth and freshness was still evident and Damon Huffman hit four triples early in the final stanza to create a gap that drove a dagger in to the Eagles heart.

Tiredness set in and the Dutch went for the kill with the Eagles virtually a spent force. Smith kept shooting, Gause driving but there was not enough left in the tank as Zwolle strolled to the final where they will play Gremi Mogi of Brazil who had defeated Niigeria earlier in the day’s other semi-final.

For the tired but not disheartened Eagles that means a return fixture against Nigeria on the final day for 3rd/4th place. In truth it is a game neither team would rather play but, international tournament basketball is all about learning and gaining experience and this has been a great experience for Newcastle.