Defoe and Huffman Make BBL Team of the Week 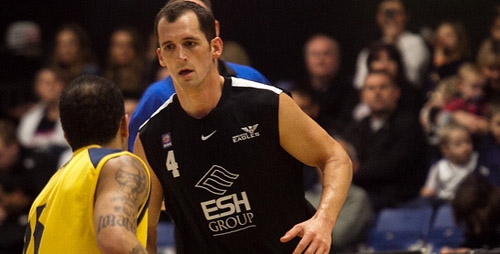 Our penultimate line-up of the campaign contains one debutante and none of those at the top of our season leader board.
Damon Huffman (Newcastle Eagles; pictured)

The playmaker gave a master-class from behind the three-point line to help the Eagles take an impressive win against Glasgow Rocks at Sport Central. Huffman finished with 36 points, after burying a total of six triples in a terrific shooting display which sparked his team into life against the visitors. Huffman also got to the free throw line and made 12 of 14 attempts in an MVP display which was the best performance of the week in the BBL. It was also the fourth time he has booked himself a place in our weekly team. Huffman did however have a slight injury which ruled him out of the game at Jelson Homes DMU Leicester Riders 48 hours later.

Whilst there was bitter disappointment for the British guard at missing out on a top eight spot after losing last Friday’s crunch game with London Lions, Jones did at least go out on a high with a super display at Durham Wildcats. He finished with an excellent 24 points, including three trademark triples. He also reiterated his versatility, by showing he isn’t just about deadly shooting, dishing up a marvellous eight assists and also doing some dirty work by pulling down four rebounds in the clash at Newton Aycliffe. Jones appeared three times in our starting five during the first five weeks of the season, but this is his first berth for almost seven months.

It has been a stunning season for the veteran who has two Molten BBL Player of the Month awards to his name. And, he continued showing his skills right up until the last weekend of the campaign by starring for Wildcats in their road success at Mersey Tigers. He conjured up a trademark all-action effort to finish with a double-double 18 points and 10 rebounds, as well as handing off five assists. And, as if to emphasise just how influential he has been for his team all season long, he came up with three steals at the defensive end too.

Currently one of the form players of the BBL, the Sharks’ forward is in just the kind of rhythm which could boost their hopes of progressing to Wembley this month after claiming his second appearance in our five within three weeks. He posted another strong performance with a double-double of 20 points and 10 rebounds against Cheshire Phoenix, his points coming primarily from an efficient eight of eleven from the floor. He also weighed in with three assists and will have to be shackled closely by the Newcastle Eagles in this weekends’ play-off quarter-finals.

There’s a debut BBL Team of the Week appearance for the Heat centre after he helped his team take an exciting victory against Marjon Plymouth Raiders at the weekend. His double-double performance was very much the highlight for Heat, as Simek accumulated 20 points from 10 of 14 floor shooting and added 13 rebounds, in a powerful performance under the basket. He also came up with a block and a steal, a pair of defensive stops which were important and contributed to him sealing his first spot in our line-up.