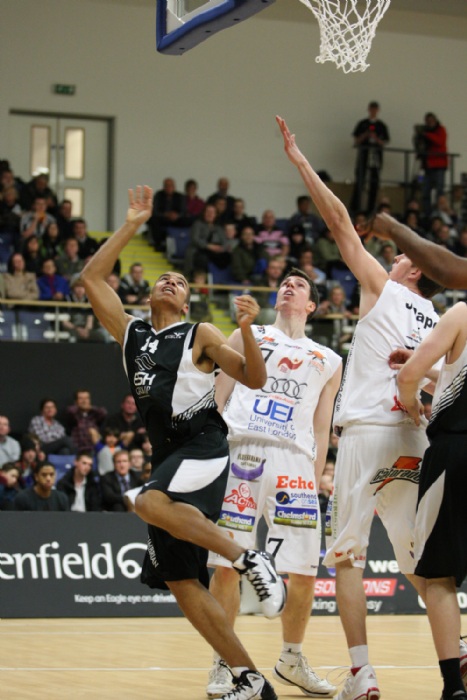 It’s been a relatively tough time for the fans of defending BBL League Champions Newcastle Eagles so far with their team languishing in mid-table and having already struggled on the road since the season tipped off back in September.

However after an extended break, the Eagles returned to action with a new face in their ranks and one that gave supporters a big reason to smile again. For local teenager Ross Wilson was handed a BBL debut last Friday at Sport Central and the player was certainly left delighted after fulfilling a dream transformation from supporter to player.

Wilson is the latest player from the Eagles development programme to play for the first team having stepped up from the U18 side and fit again player-coach Fab Flournoy was only too happy to step aside and delay his comeback to give Wilson a chance to shine.

The young small forward, who is a student at Tyne Met College, was thrilled with the opportunity handed to him and is definitely a name to watch for the future after making a scoring start to his professional career in the 96-65 home win against Essex Pirates.

“It was really good for me as I wasn’t sure that I was going to get many minutes as it depended on how the game went but I thought I did well when I came on.” Claimed Wilson.

“It took me a few minutes to really get into it but it felt really good.”

His first competitive action in a pro-game was made even sweeter by the fact he was able to showcase his potential to visiting Pirates Coach Tim Lewis who is also Great Britain coach at U20 level.

“It was great to test myself against the competition and to do it when a Great Britain coach is watching although that maybe added a little more pressure.”

“Fab (Flournoy) didn’t really say that much to me before the game other than just to go out and play with confidence.”

“I always believe I can perform when I am on the court so it was okay for me out there.”

While Wilson will be hoping his first season will be a successful one not only for him individually but also for the team, the Eagles have some way to go if they are to successfully defend their title.

Standing in their way are current leaders Mersey Tigers who still only have a solitary defeat to their name after 11 BBL Championship games and racked up another two wins over the weekend against Heat and Riders.

It was also a weekend of real double delight for One Health Sharks Sheffield who not only stormed into the BBL Cup Final where they will get to defend their trophy against the Tigers but Atiba Lyons and his players also kept in touch with their rivals at the top of the table with a convincing win over basement dwellers Essex Pirates.

Conversely, it was a bitterly disappointing weekend for Cheshire Jets who were denied the chance to make successive appearances in the BBL Cup Final while they also threw away a 13 point lead in the BBL Championship at Glasgow Rocks to lose further ground in the title race.

It was a bitter sweet weekend for UCP Marjon Plymouth Raiders who went down in Leicester on Saturday night and bounced back with a spectacular 114-111 overtime home win against Worcester Wolves who arrived at the Pavilions having beaten Worthing Thunder.